Unique among North American raptors for its diet of live fish and ability to dive into water to catch them, Ospreys are common sights soaring over shorelines, patrolling waterways, and standing on their huge stick nests. These large  hawks do well around humans and have rebounded in numbers following the ban on the pesticide DDT. 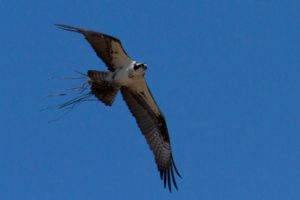 Sources: www.allaboutbirds.com and the Cornell Laboratory of Ornithology websites.