I was asked to raise a few monarch caterpillars for an education program at the Dunes, so I decided that I should probably do a little research first and learned quite a lot more than I originally anticipated. 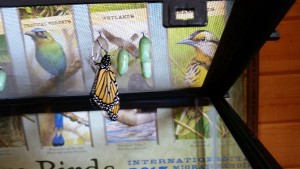 Monarchs go through four stages in their life cycle, first starting out as a tiny egg. The egg then hatches and the caterpillar appears. The caterpillar grows very quickly relying entirely on milkweed for all of its needs. Finally, it will form a chrysalis and emerge from this 10-14 days later, transforming into a beautiful orange and black butterfly known as the monarch.

Monarchs also go through four generations in one year. The first generation of eggs is laid in March and April in the Southern part of the United States as the last generation is migrating back from Mexico. Once this first generation becomes a butterfly, it will lay eggs after two weeks and then die shortly after.

Researchers are not positive how the monarchs know where to go for the winter months but some believe it may be due to shorter days or changes in temperature. Some can even travel up to 3,000 miles to reach their winter destination. Monarchs from Wisconsin travel to the Sierra Madre Mountains of Mexico where they rely on the oyamel forests for protection. Thousands of monarchs land on the same tree, almost entirely covering it. Thankfully oyamel trees are strong enough to support the weight of all those butterflies!

Unfortunately, monarchs face many threats in their short lifespan including habitat loss and pesticides. Milkweed is essential to monarch survival and there has been a decrease in its presence due to both pesticides and urbanization. Habitat loss for monarchs has occurred in both  Mexico and the United States.

From images of the mass migrations it may seem that there is a healthy level of monarchs, but their populations have decreased from one billion to half a billion in 40 years. Something needs to be done to protect and preserve these butterflies before they are all gone. The Mexican government created the Monarch Butterfly Biosphere Reserve in 1986 that contains 217 square miles of land in prime monarch habitat. The Obama administration is also working to create a 1,500 mile butterfly corridor that spans from Minnesota to Texas in hopes to aid the monarch migration route and work to protect the species.