The Benefits of Playing in the Mud 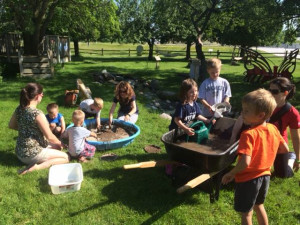 Mud: white clothing’s worst enemy and a worm’s best friend. Woodland Dunes recently celebrated International Mud Day on June 29th, and Jess and I were ecstatic to celebrate this special day with about 20 visitors! Children from ages 2-10 came out and got dirty with us! Playing in the mud may not seem like environmental education but let’s “dig in” to see why playing in the mud is so important and a great learning opportunity.

Reason #1: There are many living things in soil. Earthworms, millipedes, centipedes, oh my! Taking 15 minutes to explore in the dirt with a field guide could result in the discovery of 15 creatures. Soil environments are a great place to identify creatures because these environments have one of the largest amounts of biodiversity, or the variety of species living in an environment, on Earth!

Reason #2: Playing in the soil or mud gives children one-on-one time with nature. Connecting with nature has become increasingly more difficult with the latest developments in technology. Instead of playing video games, children should be encouraged to go get dirty and explore. It is extremely important for everyone to connect with nature in their own personal way because they are more likely to care for it and will want to protect it that way.

Reason #3: Playing in the mud can actually make you happier! Recent studies have shown that playing in the dirt exposes humans to bacteria that has proven to boost moods just as effectively as antidepressant medications. According to research done by Bristol University in the United Kingdom, the soil microbe responsible for the mood boost is called Mycobacterium vaccae and it raises serotonin levels and stimulates neuron growth. Cancer patients who have been exposed to Mycobacterium vaccae have reported a higher quality of life as well. Have a child in a cranky mood? Send him/her to play in soil!

Reason #4: Ever heard the phrase “rub some dirt on it”? Believe it or not, some dirt on a cut or scrape can actually be beneficial for the body. There are certain types of clay that have been proven to kill a wide variety of pathogens, including E. coli. So while actually rubbing dirt on a wound might not be the best idea, a little dirt might not be so bad.

Reason #5: Dirt exposure at a young age can prevent allergies! Want to save a child from an adulthood full of sniffles and watery eyes? Exposing young children to the microbes found in soil lowers the amount of inflammatory immune cells in their lungs which helps prevent allergies. Studies have shown that bringing children outside when they are younger will actually help prevent the development of allergies or asthma.

Lastly, the most important reason of all… PLAYING IN THE MUD IS FUN! The children at Woodland Dunes had a great time playing in the mud and exploring the soil to celebrate International Mud Day! There are so many benefits to playing in the mud and it can also serve as a wonderful learning activity. Go play in the mud sometime this week, I promise that it will be fun!