More and more I realize that the notion that my yard, or my house for that matter, is my own is a delusion. Although people dominate the world and the era we now live in is referred by some biologists as the Anthropocene or Age of People, other species constantly occupy our space and accompany us in our daily lives. Not all in a negative or parasitic way- some are commensal in using the changes we have wrought on the world. Some of these relationships are by invitation- like our dog and two former feral cats, the wrens and bluebirds that use the nest boxes we put up around our property, or I suppose the variety of wildlife that uses the plantings we’ve done. Others arise from opportunities that we create for wildlife without knowing it.

As I sat on the deck at home recently I realized that not only the wild areas of our property are used by birds, but every building as well. Some have provided bird homes since long before we owned our property.

A couple of starlings and house sparrows have been nesting under eaves and in odd spaces in our old barn since it has been there, I’m guessing. The starlings have found a wooden chute of some sort in the side of the barn, the purpose for which is unknown to me but it works really well as a nest cavity. A small group of starlings is in the yard year-round, and in early spring a pair claims the chute and appears to raise several broods over the summer. They don’t come to our feeders, and I assume they go to neighboring working farms to feed, but they are faithful to their nest site. 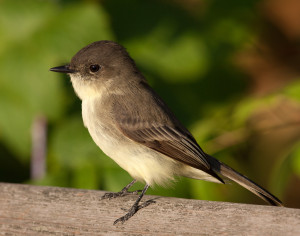 Also since we have owned our place a pair of phoebes has nested every year, formerly in a large culvert under the road, and more recently in the barn. This year they decided that the underside of a seat in an overturned canoe on a rack would be a good place to nest. I admire their judgment, as it would certainly be difficult for any large predator to get to them under their hanging aluminum dome. They quietly slip in and out, admonishing me with call notes when I need to retrieve our lawnmower.

In the garage are a pair of barn swallows, who, rather than build an attached mud nest, have taken over an old robin nest on top of a light fixture. A little extra mud lining was all that was needed. Our old garage doors don’t fit very tightly, and even when closed the birds have access to their home. They are busy now, male and female, constantly bringing insects to their young.

The rotted eaves of the old chicken coop allowed access to a pair of white-breasted nuthatches, who have survived not only fox snakes but my repair efforts (which were postponed when the birds were discovered). Their brood is already out of the nest and in the yard begging for food from the adults. And in our house itself we unintentionally provide a nesting place for chimney swifts, whose young have also emerged recently. Our old, large, brick chimney has also been used every year by swifts since we have lived in the house, and we will maintain it for them despite the installation of a new, efficient furnace that doesn’t need one.

Assuming that each of our bird co-habitants raises four young, there are about 30 birds occupying the buildings around our house, not including house sparrows. They don’t damage anything, and we enjoy all of them, although one quickly learns where not to park the car or risk extra trips to the carwash!