As I was weeding in the Butterfly Garden at the Nature Center one afternoon, I came across several earthworms and thought to myself, “what is an earthworm?” 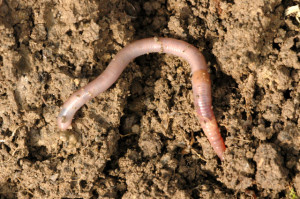 Earthworms are invertebrates, and their bodies contain several ring-like segments that are called annuli. They can live up to 6 years and spend most of their time below the surface burrowing but rise above the surface only during the night to feed or mate.

Many know that earthworms are great for gardens as they decompose dead and decaying materials into nutrients that are important for flower and vegetable growth and aerate the soil. But, many may not know that earthworms are actually an invasive species to Wisconsin, and much of the  United States, having originated in Europe. I first learned this in an introductory biology class my first year of college. I thought there was no way that earthworms could be invasive since they are everywhere, but unfortunately, it is true. They may even have arrived as early as the 1600s when the first European settlers arrived. Earthworms were most likely native to the Midwest before the glaciers, but then were wiped out when the glaciers formed. This means that between the glaciers and the first European settlers arriving, the Midwest’s forests developed without earthworms. Therefore, earthworms are not a necessity to our soils.

It is possible that earthworms are actually changing our forests in a negative way. Before the earthworms arrived from Europe, the soils contained thick organic layers that provided nutrients for several plant species. The earthworms are now removing this thick organic layer which will change the ecosystem by preventing these plant species from growing. By looking at images from before and after earthworm invasion, the difference is quite dramatic. Beforehand, the forest floor is covered with vegetation including grasses and small plants as well as dead leaves and other organic matter. After earthworms have invaded the area, the forest floor becomes nearly bare with mainly just trees present.

Not only are the soils being affected, but so are the animals, including songbirds such as the ovenbird. Ovenbirds make their nests on the ground and rely on the dead leaves of the forest floor to act as protection for their young. Because the earthworms are removing this leaf layer at a rapid pace, the ovenbirds are losing their protection and their young are predated on more easily. It has been found that in areas with higher amounts of earthworms, the ovenbird and other ground nesting species are beginning to decline.

All of this may seem overwhelming as earthworms seem to be almost everywhere, but there are ways that you can help. If you are using earthworms for fishing, you should throw unused earthworms in the trash- please don’t dump them in the forest! When earthworms are used for composting, it is important to freeze the compost for about one week before it is used, to kill all of the earthworms and their eggs. If you own ATVs or other vehicles with treads, you can make sure to clean out all the soil before you move on to another location as the soil could contain earthworms or eggs. In even the smallest of ways you could help prevent the spread of earthworms, to preserve our forests to their natural state, allowing both native plant and animal species to thrive.