“Ew, I caught something really gross!” 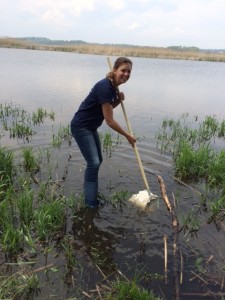 Pond dipping is full of surprises, and a great education activity for children who visit Woodland Dunes. There are so many creatures living in our ponds that we may never realize are there unless we take it upon ourselves to explore. Throughout my first three weeks as an education intern at Woodland Dunes, I have had multiple experiences with pond dipping. I have had the chance to dip in four ponds and two rivers. I have learned all of the techniques of being a perfect dipper, such as dipping near vegetation and roughing up the sediment at the bottom of the pond, as well as the different equipment that can be used for pond dipping – most commonly a long net. 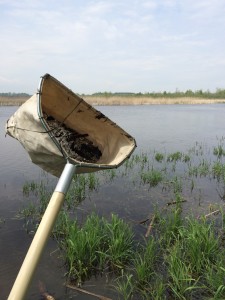 I have also learned that prime dipping conditions are when the temperature is a little warmer and the sun is shining. Although I have learned a lot about dipping over the course of the last three weeks, I will admit that I still have a few faults. My biggest can probably be concluded from the dialogue at the beginning of this article. I think that some of the creatures that we discover in our ponds are gross! I usually can hold my breath and grab the creature out of the net and put it in the bin, but there was one scenario where I just couldn’t get myself to do it. This creature, a macroinvertebrate, can be up to two inches long. It has six legs, strong, sharp jaws that are used for catching prey, and is sometimes called the “Water tiger.” “Water tiger” is an accurate name because this creature is an aggressive predator, it will eat literally anything within its reach. Tadpoles, small fish, insects, and even frogs make up the diet of this vicious predator.