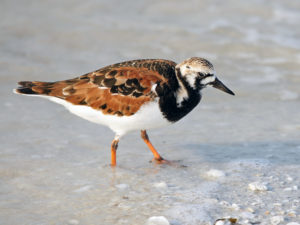 Woodland Dunes operates a station which “listens” for signals emitted by radio tags that are affixed to migratory birds.  We are part of a system known as Motus, which was developed in Canada by researchers.  As with bird banding, a few wild birds or other animals are caught and fitted with very small transmitters- the smallest can be used on butterflies or dragonflies.  The transmitters don’t harm the animals, which are released to continue their travels.  An array of receivers detect the animals as they pass by, each of them transmitting a unique signal that allows researchers to identify them and know where they have traveled to and from.  The transmitters, especially the smallest ones, have a limited battery life, while larger ones transmit for longer periods.

The Motus system receivers consists of an array of antennas and a small computer and have a range of up to 15 kilometers if they have a clear line of sight.  Our receiver is near the center of the nature preserve, about a mile from the shore of Lake Michigan.  Data is stored on a memory card, and twice a year data is downloaded from the card onto a computer, and sent to the Motus headquarters for analysis.  There is usually a lot of data, but much of it is from radio interference picked up by the very sensitive receiver.  But in among all the “noise” are sometimes some very interesting signals from migrating birds.  Harvesting the data is like Christmas – the information is an invaluable gift.

Recently, data from last fall and this winter was obtained, and it yielded some remarkable information.  During the period, three birds were tracked.  That doesn’t seem like a significant number, but in the past year there has been less research activity due to the pandemic.  Even so, we were able to track some amazing bird movements- all three of the birds were tagged in Canada.  Two were shorebirds (sandpipers), which often travel incredible distances when they migrate.  One of them was a ruddy turnstone, a beautiful, colorful shorebird, which was tagged by the US Fish and Wildlife Service.  The bird was detected in Pennsylvania and South Carolina in June, in Quebec during the summer, and flew by Woodland Dunes in August.

The second was a dunlin, another shorebird, which was tagged on the Pacific in Canada, and this year detected in North and South Carolina and Pennsylvania during the summer, and at Woodland Dunes in August.  These shorebirds seem to be very active and wide-ranging in their movements.

The third was a Swainson’s thrush, one of the most commonly banded birds at Woodland Dunes in early fall.  This bird was tagged in Saskatchewan in summer and traveled east, then south through the Great Lakes region in late September, spent a few days resting up at Woodland Dunes,  and was then detected in Florida on October 1st.

None of these birds are large, and it takes tremendous effort for them to migrate such long distances. Woodland Dunes and other natural areas along our Lakeshore serve as places for them to stop, feed, and rest as they continue on their dangerous travels.  They are important and beautiful components of our natural world, and to sustain them we have to take care of the places they need.  It isn’t just a matter of protecting pretty birds.  Its a matter of keeping the natural world in a state where it can continue to function.  For the benefit of wildlife, and us as well.