The beautiful fall days of late have given us wonderful opportunities to explore outdoors.  The forests and wetlands have been full of birds, wildflowers are still blooming, and now the tree leaves are starting to show their hidden colors.  Rather than scorching us, the warm sunshine is relaxing and inviting.  No wonder that for many of us this is a favorite time of year. 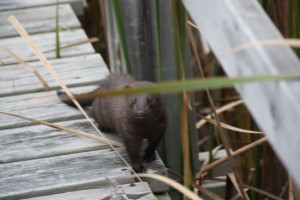 One doesn’t know what to expect from a walk on the marsh boardwalk now, there are so many possibilities.  This week a visitor from Texas was walking and photographing plants and birds when a mink climbed onto the boardwalk in front of him, walked toward him for several seconds, then dove off into the shrubs.  This was a lucky encounter- we know that mink are common in the preserve, but we see far more evidence of them, especially tracks in winter, than the animals themselves.

Mink are weasels, one of a number of species in the weasel family, which includes several species named weasels (least, short-tailed, and long-tailed), mink, fisher, and otter that are found at Woodland Dunes.  Our mink is the American mink, which is a widespread and adaptable species which is valued by people mostly for it’s fur which has been used to make clothing for probably thousands of years.  They are typically dark brown animals about two feet long and are slender and fast moving.  They are adept at squeezing into small spaces between downed logs, rocks, and such, and are often found near waterways.

Like other weasels, I think that mink would eat anything they can catch unless their prey has some sort of very effective defense (such as a chemical toxin).  They are good climbers and swimmers, and eat fish, crayfish, rodents (including large ones like muskrats), birds, eggs, insects- I’m sure the list is nearly endless.  To a prey animal, a mink is probably the last thing that they would want to, and often do, see.  They prefer to be near water, but not near each other.  Male mink will defend territories that are from about 1-3 miles in length from other males, although females are allowed.  As with many predators, their tendency to be territorial limits the number of animals found in an area.

Mink will nest in a den which might be ten feet or more long with several entrances.  Within the den, the female will give birth to usually four young, which will remain with her until fall.  Their father, however, is not interested in providing for his family and is probably better avoided by his children. By the next spring, the young have matured and are ready to begin families of their own.

There are or were other mink, like the sea mink of the Northeast which was hunted out of existence by the end of the 1800’s, and the European mink. As is often the case with people, Europeans brought American mink over to Europe and released them in a number of places because the American species is larger and has denser fur.  Thus our mink has become an invasive species in Europe and is causing the decline of the smaller European mink.

Mink, like other weasels, are energetic, resourceful, and fun to watch.  A couple of years ago I watched two chasing each other and playing as they circled the pond near our viewing tower, and they are also seen on Willow Trail and in the south part of the preserve near Woodland and Goodwin Roads.  Another place to see mink is at the containment area at Manitowoc Harbor, where they live among the rip-rap.  If you are patient, and lucky enough to see one, I think you’ll find them to be fascinating animals, and important habitants of our natural areas.