↓
Home Menu ↓
Skip to primary content
Skip to secondary content
We’re in what I think of as a golden time of year.  Trees are possibly the most sensible of living things as they have now stored enough energy for the year and so give up on photosynthesis and take a nice long rest.  At least the deciduous trees.  And with the sun a bit lower in the sky, and so many trees now yellow in color, the nice days are now bathed in gold.  Even the insides of buildings with windows overlooking natural areas take on the golden hue and it makes the world seem a little more pleasant. 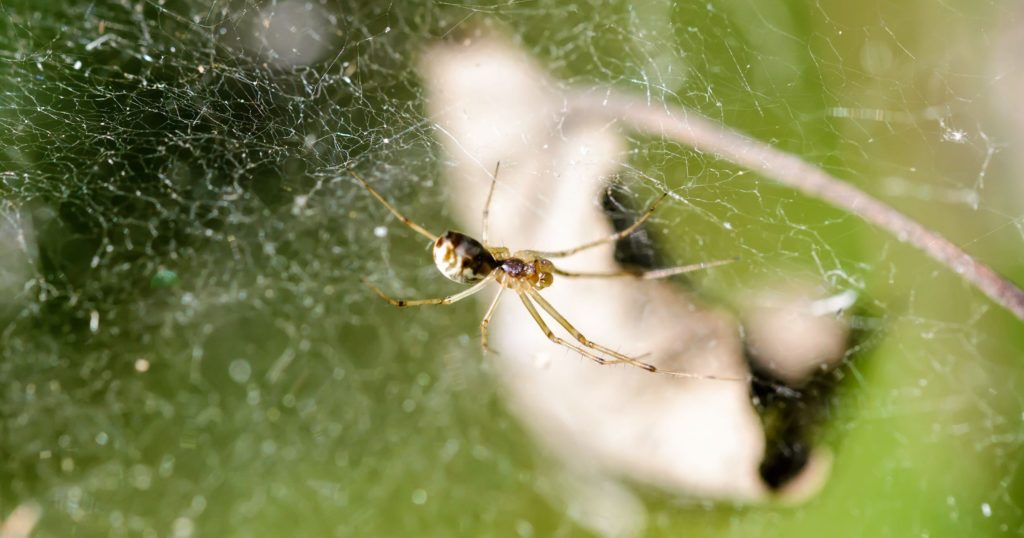 I was looking at a large walnut tree recently on a sunny afternoon, the sun beginning to sink to the south-west. The tree was lit up, but also adorned with strands of spider silk trailing away, sometimes for many feet. This is the time of year when many little spiderlings take flight, dispersing themselves from their place of birth to new habitats in search of a home of their own.
Spiders and some caterpillars produce and use silk in a number of ways.  It seems the caterpillars use silk to move vertically, from higher branches to the ground- presumably to walk to new trees.  And of course to spin cocoons in which to pupate. There are a great variety of kinds of spider webs- some just loose collections of strands, others highly organized funnels or orbs. Some use silk to line their dens in the soil and bind materials together to make trap doors. Some carefully wrap their eggs in a ball of silk and carry the bundle with them.
We are fortunate to have thousands of species of spiders- according to one source there are 3,400 species in North America.  We seem to have an inherent fear of them and I admit to being as susceptible to being startled by an unexpected spider encounter as anyone. In reality, their lives are inextricably woven into the workings of the ecosystem around us- consuming vast quantities of insects which have the potential to annoy and harm us far more than spiders themselves ever will.
Most of the time they are able to go where they wish on their eight jointed legs. Sometimes, however, they are compelled to fly, and have evolved a very sophisticated process to do that- ballooning. It turns out the process is more complicated than I had previously thought and involves both wind and electricity. A spider, either a youngster or an adult, first gauges the wind using it’s front legs, sticking them up in the air as we do a wet finger. If the wind is right- breezy but not too strong- the spider anchors itself with a silk strand, then lifts up its abdomen. Its legs can also detect electrostatic fields in the atmosphere and the spider can manipulate the electric charge in it’s silk, making the silk more attractive to the forces in the air and at the same time repelling strands of silk from each other so they don’t become tangled.
At the right moment, the spider shoots one or more strands of silk from it’s abdomen and releases it’s anchor line.  Between electrostatic charges and the force of the wind, the spider is lifted up, sometimes thousands of feet into the air. Once airborne, the spider may also use those charges to change it’s altitude.  Spiders can travel anywhere from short distances to thousands of miles using this method. Ballooning is not without danger, as spiders are snatched from the air by birds or may land far out in water. However, the incentive must be high and numbers great to justify so many taking flight.
So as we enjoy these last golden days, remember that birds and insects are not the only creatures in the air above. Even though they have no wings, spiders have found a way to share the friendly skies with all the other creatures above.