On a recent walk in my neighborhood, I noticed a series of lacy, white sheets on top of a manicured row of hedges. I stopped to investigate and found they were funnel weaver spider webs. I peered into one web and saw a spider, motionless in the center. This spider is commonly seen in shrubs and tall grasses in the late summer. There are two groups of funnel weavers and this beauty belongs to the grass spider group (Agelenopsis). 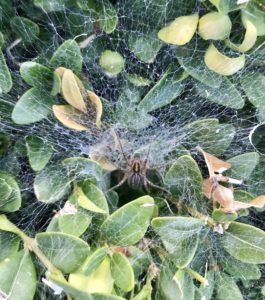 All spiders have two main body parts: an abdomen and a cephalothorax which is a fused head and thorax. They have eight legs and usually eight eyes, arranged in different configurations and even different sizes depending on the species. Spiders have a set of appendages located near the face called pedipalps, which are a sensing organ. You can tell which spiders are males because they have enlarged pedipalps which are used during courtship and mating. Spiders have six spinnerets located on the underside of the tip of the abdomen to help construct their webs.

Grass spiders are mostly brown in color and have some markings along their abdomen. Their eyes are the same size and are arranged in two long, curved rows. This group of spiders has an elongated set of spinnerets that are noticeable from above. In fact, they are the only brown spider with long spinnerets in our area. Grass spiders are often confused with wolf spiders because both have similar color patterns around their head. However, the grass spider has the obvious set of spinnerets and wolf spiders ambush their prey, so do not spin a hunting web.

The funnel spiders get their name from the webs they create. They spin a sheet-like web on top of the grass or shrubs with a funnel-shaped retreat. Webs have also been observed at the base of woodpiles and buildings. The web is not sticky, so the spider waits in the entrance to the funnel until it feels the vibrations of an insect on it’s web. Then it quickly crawls out, snatches it up and injects it with venom, which turns the insect’s insides into a liquid. If the spider isn’t hungry at that time, it will wrap its prey in silk and save it for later.

In summer and early fall, grass spiders will lay up to 200 eggs and wrap them up in a disc-shaped egg sac made of silk. The egg sac is hidden in a crevice or crack near the web and the female will eventually perish in the fall. The eggs will hatch in spring and the cycle will begin again.

Insects and spiders are the most abundant in late summer and fall, making this an excellent time to watch and learn about these interesting and important members of the natural world.