Last week one of our staff who lives on a farm near Maribel shared excitedly that she had seen a snowy owl in the field next to her home.  Even though she’s not a birdwatcher per se and there are hundreds of birds around the farm, the sight of one of these large, charismatic birds caught her attention as it does for so many of us. There is something about owls- perhaps their large, round eyes which face forward on their heads, combined with their overall soft and cuddly appearance that triggers a special reaction among many. And large white owls, straight out of Harry Potter- they seem to become seasonal rock stars of the bird world. 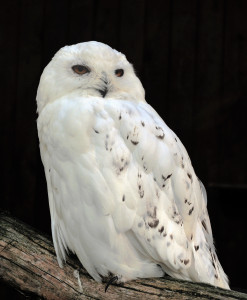 Snowy owls are migratory birds.  We don’t see them in the summer- they are settled far to the north then, raising broods of fuzzy owlets on the tundra. Unlike many of our more common owls, snowys, in summers when there are lots of lemmings to eat, raise a nestful of young which can sometimes number 10 or more. If the hunting is good and many of these young survive, there is more competition for food in the fall and winter, and more than usual need to move south and find suitable places to spend the cold months. During years when hunting isn’t so good, more of both young and older birds move farther south in search of prey such as the meadow voles that can be so abundant in our agricultural fields. So there can be several reasons that more owls are seen here in some winters- either things were great in the arctic and there were many young hatched, or times are tough up there and they are coming here out of a very real need to find enough food to survive. We don’t always know which is the case at first.

Owls, when they first arrive here, have traveled at least hundreds of miles under their own power, have evaded natural and man-made obstacles of many sorts, and survived challenging weather. They may be disoriented and are looking to familiarize themselves with their surroundings and evaluate the habitat in terms of food and shelter. That’s where our fascination with them can become a problem. Snowy owls are often readily visible in fields before snow cover occurs. That can be great for birdwatchers and wildlife photographers who are looking for them, and crows which like to harass them. But the owls can see us too, and although they may have never before encountered people, allowing a large animal like we are to get too close would not be a good survival strategy, so they move away.

Even though they move to what they consider a safe distance, its often not that far away so people follow them. And they move again, and this repeats over and over, day after day. Instead of conserving and storing energy which can be used to survive and return to the Arctic to successfully nest next spring, they may constantly be using that energy instead to evade well meaning people. Sometimes people are even more intrusive, baiting the birds with rodents, or even using drones to get close to the birds. These are selfish behaviors on our part, and our good looks and photos may come at the expense of the owl’s well-being.

We can’t often tell if these birds are starving because their feathers make them all look fat and fluffy.  Several very undernourished snowys have already been brought to wildlife rehabilitators this fall, and additional stress could cause such birds to perish.

The Wisconsin Society for Ornithology (wsobirds.org) has a birding code of ethics that is well thought out and if followed would minimize any harm to birds. As a basic rule of thumb, though, if you approach a bird and it flushes, you have gone too close. If you care enough about birds to want to find them or photograph them, do it from a distance that is comfortable for the bird too.