As the reality of the fall season sets in, there is much to be enjoyed.  At the Nature Center, groups of children visit daily, being taught by our naturalists, staff and volunteers.  Sometimes they are little angels, sometimes they are distracted and antsy, but they add life to our center, which would be too quiet without them.  They learn about trees, deer, owls, and how birds use their beaks to do amazing things. They do this outside where each day they encounter things which are unplanned.  They do so on nice sunny days, and cloudy cool ones, and learn that it’s good to be outdoors even when the weather isn’t perfect.  They see the last of the wildflowers bloom, the last of the butterflies, and perhaps they notice drab little birds in the bushes.  They probably don’t, which is fine with the birds- they don’t want to be noticed this time of year. 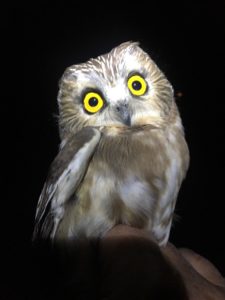 For most species, the big push of fall migration is past now.  There are still a few warblers and kinglets, flocks of robins and blackbirds, but more and more we see the late migrants – juncos, pine siskins, and purple finches, and soon – tree sparrows.  The northern waterfowl have yet to make big movements into our area or perhaps are just starting.  Sandhill cranes are still around, picking at the fields for whatever food they can find, but I think they have one eye on the weather now and are ready to move when needed, just like the geese.  If the weather is above freezing without snow cover they are fine, but they are poised to fly south just enough to stay in their comfort zone.  Great blue herons and kingfishers are the same- as long as water is liquid and fish can be caught, they are fine, but they will head out at the first sign of icing… if they are smart.

This fall’s weather wasn’t the best in terms of saw-whet owl movements here.  There were a few good days, and many that were less than ideal.  Although we haven’t caught as many as we’d hoped, we did recover three that were banded by others: one which was banded last year at Stevens Point, and two sporting new bands for which the original data has not yet been submitted.  All three appear to have been banded at different locations based on the band numbers, and we’re looking forward to finding out where there journeys have taken them.  Of the well over 5,000 owls caught and banded at Woodland Dunes,  birds have been re-caught in many places, from Quebec and Ontario in Canada, Minnesota and Michigan, and south to Ohio and even North Carolina.

Trees weren’t colorful this fall, and now strong winds quickly strip them of their leaves.  The transition from an October landscape to that of November seems sudden each year.  I’m grateful for the red of the dogwoods at the marsh edge, and the green and gold of the conifers as they display this year’s new growth while at the same time ejecting their old needles, which will rain down and help acidify the soil.  Cued by these changes, we meow mix the last preparations for pollinator and grassland plantings.  Final weed treatments followed by seeding are being done now, the start of a five year practice in patience as the wildflowers and grasses slowly adjust to the soil, growing their huge root systems and finally blooming.  They will fly under the radar as we wait and fret, wondering if we did something wrong.  Then, with the help of some mowing or burning they’ll suddenly appear.  Trees and shrubs seem to require less understanding because they are more visible and easier to understand.  Still, they too, pause to grow a strong foundation before they can reach upward.

Autumn is a busy time in the natural world as wildlife of all kinds prepares for winter.  So much can be learned from the life around us, especially here on the Lakeshore.  We are fortunate for the opportunity.