We’re now firmly in the midst of another seasonal tug-of-war.  On one hand summer hangs on meteorologically, but at the same time, biologically fall is moving forward relentlessly.  Birds, bats, and insects are all streaming to places where in the coming months will be much more friendly toward them.  On clear, calm nights birds cross the skies like unseen meteors, revealed only by their brief call notes and radar images.  During the day, dragonflies and butterflies make a more leisurely but equally difficult journey.

Right now, common green darners are passing through by the thousands.  They are the large dragonflies we often see around here- males are green and blue, and females and juveniles are green and brownish.  They migrate along the shore southward in the fall, eating smaller insects as they do and being eaten by birds such as American kestrels which migrate at the same time.  At times, the dragonflies seem only intent on traveling, all of them moving southwestward in unison.  At other times, they must really need to refuel, and they are seen criss-crossing meadows in search of smaller, more vulnerable members of their insect relations to be snatched from the air and eaten.  As a human, I always appreciate dragonflies pursuing and consuming the deer flies and mosquitoes which hover around me.  At the same time, I can only imagine how terrifying it would be to be caught by one of those remarkable predators and crushed in their huge sideways jaws. 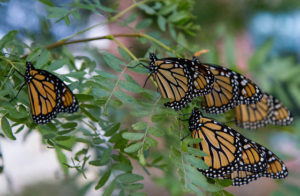 The highlight in terms of insect migration is that of the monarchs.  One wonders how this species developed such an ambitious means of surviving winter – traveling all the way to central Mexico while other species instead cope with winter in their chrysalis, in the leaf litter, or at the end of a much shorter migratory journey.  I’m sure that in the end it’s a good thing that all butterflies, or animals of all sorts, don’t behave in the same way so that too many aren’t at risk as the result of the same catastrophic event, such as a storm or fire.

Whatever the cause, monarchs have become dependent on the success of a very long fall journey, just as they have become dependent on the common milkweed as a host plant over the last million years or so.  People have changed the world, and virtually all of the eastern monarchs winter on just a few acres of habitat in Mexico, habitat that is shrinking because of logging and converting it to farmland.  At the same time, there are fewer milkweed plants here in the midwest. Milkweed was once considered the most important agricultural weed.  As a result, the population of monarchs is only 10% of what it used to be.  And this happened in my lifetime.

Its important to recognize this and cherish every monarch you see passing along our Lakeshore.  Plant a few milkweeds if you have any room for a patch.  A wonderful example is at the Lester Public Library in Two Rivers, where they have just established plantings for butterflies and saw almost immediately how important and attractive those plantings were.

A couple of years ago, we restored a wetland at Woodland Dunes, and volunteers saved about 1,500 monarch caterpillars before we excavated the site (which was again planted with milkweed and other native plants).  They were raised to butterflies, and some were tagged before they were released at the end of summer.  A few weeks ago we received word that one of them, UEJ 963, made it all the way to El Rosario, Mexico, a distance of 2,254 miles, where it was found.  We marvel at the ability of small birds to travel distances like that, let alone an insect that is as fragile as if it were made of paper.  The simultaneous simplicity and power of this is miraculous ( and a large part of what makes nature study so compelling).

The monarchs began migrating in early August, and large numbers have still been seen moving recently.  It’s been a good growing season, and I think a good summer for monarchs around here.  As they leave us on their incredible travels, we can only hope that enough will survive to keep the species going so that our children and grandchildren and all of the other lives monarchs touch can benefit from them.