On warm days here at the Dunes it isn’t uncommon to see a common garter snake basking in the sun alongside the trails. Common garter snakes (Thamnophis sirtalis) are some of the most abundant snakes throughout the eastern portion of the United States. They live in a wide variety of habitats such as meadows, woodlands, marshes, hillsides, edges of lakes/streams/ponds, and are common in urban areas too. 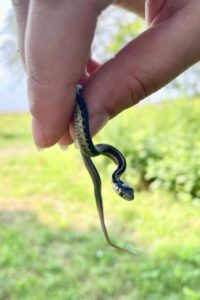 Garter snakes are variable in color pattern but typically have three light colored stripes that run along the length of their body. They can even grow to be five feet long! Though males are typically smaller than females are. Garter snakes eat earthworms, amphibians, slugs, snails, insects, crayfish, small fish, and small snakes. To avoid being eaten, they rely on camouflage. Their stripes make it difficult for predators to see them amongst the grass. If spotted they will flee into water to avoid land predators. If they cannot flee, they can strike and bite though they aren’t venomous. If you have ever picked up one though you may also know that if grabbed they will release a foul-smelling secretion to deter predators. Yuck!

Now that the weather is colder…what happens to the snakes? Common garter snakes hibernate late October through March. Since they are cold blooded, their hibernation is called brumation. If the weather is warm enough though they will wake up to sun themselves outside. Since the snakes have no arms, using a shovel would be pretty difficult, so instead of digging their own hibernation space they use natural cavities (fallen logs, stumps, under rock piles) or will use old animal burrows.

While they are hibernating, they can absorb moisture through their skin, however, they cannot eat during this time because their body temperature is too low to digest food. Like other hibernating animals, snakes will build up fat reserves to help them make it through winter. Once the weather warms up and spring comes around the snakes will emerge and bask in the sun alongside the trails once more.