↓
Home Menu ↓
Skip to primary content
Skip to secondary content
Woodland Dunes was founded by Bernie Brouchoud, who was incredibly curious and interested in birds.  When he was young, a local teacher, Winnie Smith, taught him how to catch and band birds so that their movements and lifespans could be studied. In doing that, Bernie realized the value of Woodland Dunes and the Lakeshore in general, for wildlife.  He banded and released tens of thousands of birds and taught many folks about them.  More than 5,000 saw-whet owls alone have been banded at our nature preserve, and out of those more than 100 were recaptured at other locations, giving us insights into where those mysterious birds go during migration.  Compared to other species, we have more recoveries of saw-whets than others. They appear to be susceptible to capture and very consistent as to their migratory routes. But there are hundreds of other species of birds which call Wisconsin home for at least part of the year, which are much less likely to be captured and recaptured. 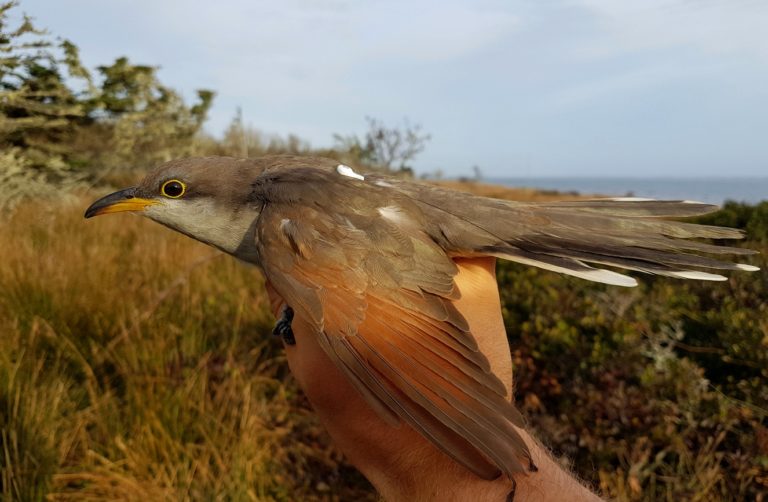 In traditional bird banding, an aluminum band is placed on the leg of a captured bird, which is measured and released. The bander is hopeful that the bird will be re-caught by another researcher, but that doesn’t often happen for most species. We are lucky if we collect one additional bit of data about each banded bird.
As for many things, technology is changing for wildlife biologists. Years ago radio collars were developed which emit a signal that allowed for the tracking of animals, usually large species like bear, elk or wolves, with the researcher walking with an antenna hoping to find the signal from an animal’s transmitter. Equipment was expensive and these studies took a lot of time to collect and interpret data.
Now, small, lightweight transmitters have been developed, small enough to even be placed on songbirds or large insects. Researchers are using them for a number of studies and biologists at Bird Studies Canada came up with and implemented a cooperative system to have receivers networking with each other. Their goal is to promote a network of receivers that can record animals like birds as they travel near stations over a large area. The system is called Motus, and many receivers have been deployed in Canada and the eastern US – each of them sending information back to a data center. To date there are no Motus receivers in Wisconsin, although we know migratory birds are being tagged in Canada and are probably migrating through our area.  Thanks to a generous donation from one of our members, Woodland Dunes will be one of the first Motus stations in the State. Several Motus are planned along Lake Michigan and across to the Mississippi river in the hope of recording tagged birds as they move through or over our area.
Unlike banding, where one would be lucky to recover a bird, a system like Motus will give researchers multiple location readings from as far as 15 km (9 miles) away with no need to catch or handle the bird.  We will also have the capability to tag birds ourselves, to study their movements within the preserve, for example, and follow birds that hatched here as they migrate to other places.  Not only will this improve our ability to study wildlife, but the increased data will allow us to better educate people about wildlife movements.
We hope to have our receiver up and running in a few weeks, and look forward to learning more about the wildlife we value so much.
photo by David Bell- yellow-billed cuckoo with a nanotag, a small transmitter