If you own a dog, you are assured to get outdoors in all kinds of weather and at all hours. I am one of those people and am sometimes less than thrilled at these excursions, especially when they happen in the middle of the night. At other times, I see things that I would not otherwise notice. I’ve written about this before, but I am so frequently reminded of the value of these little canine excursions that I think they bear further mention.

Lately, owls have been more apparent both at home and at Woodland Dunes. Even though they are not breeding this time of year, screech owls owls are calling and are more noticeable, perhaps because the nights are longer and I am outside more in the dark.  Actually, they never really seem to stop calling, but in summer seem to produce their quiet, tremolo call more than their full-fledged screech or whinny. Their eerie vocalizations are especially appropriate around Halloween, and I wonder what they think my little companion and me out for evening or early morning rounds. Great horned owls are vocal now too, as this is their courtship season. Theirs is a booming call that carries for long distances, with males calling at a lower pitch than females. 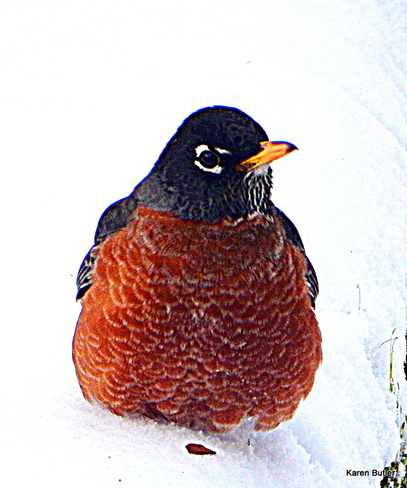 Any time that it’s not completely dark there are birds at or beneath the feeders – cardinals especially seem to be present when the light is low. Juncos are back, but there are still white-throated, song, and fox sparrows lurking in the weeds.

Lately, during the daylight hours, there have been robins everywhere, and it’s been that way for several weeks. This morning, despite the onset of another early-season snowfall, the very first bird to be heard was a robin, followed by a mallard duck. I live in a neighborhood with many crabapple trees which are wonderful sources of bird food. There are also thousands of common buckthorns – an invasive plant from Eurasia which also produces berries which birds consume. Eating buckthorn berries causes digestive problems for animals, to put it delicately.  The buckthorn berries and their seeds pass through the robins rapidly, so the birds are a great source of seed distribution for the invasives. And they seem to sprout everywhere. They must supply just enough nutrition to keep the robins in the neighborhood, at least until the real cold arrives.  Then the robins will move south just far enough to feel they can tolerate the winter, many just a few days flight south of here, ready to return when spring does. The less-hardy birds go to the Gulf coast  or even central Mexico. They are not the same birds as are the robins of Europe- those are smaller and lighter-colored members of the flycatcher family, while ours are thrushes.

We usually think of robins eating worms on the lawn, but there certainly won’t be any worms around here for those birds who choose to stay all winter.  Really, most of their diet consists of fruit and insects, although worms are certainly a favorite when available, conveniently right around nesting time. And all of those crabapples, berries, and bugs help to sustain a species whose numbers are estimated to be about 320 million birds, almost as many as there are people in this country. Unlike us though, they have to watch out for hawks, stray cats, and windows to survive.

Seeing robins when the world is snow-covered is a treat, and even though we’re just starting winter, a sign of things to come.  In the meantime, I’ll appreciate their hardiness, and look forward to the next interesting encounter with them on these little but necessary walkabouts.