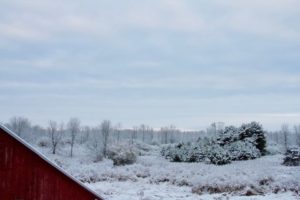 November is a cold month- I associate that time with cloudy days with high temperatures in the 30s and 40s.  It’s cold but not frozen until later in the month. There are some beautiful 50 degree days that are well suited to working outdoors, and the last migrant birds are still hanging around: robins and white-throated sparrows, sandhill cranes, and blackbirds.  This year there was snow, but it was as if the grass was surprised by it and remained green beneath the icing only – to have it melt and subject the plants to real ice.

Then, it seems usually around the first of December we start getting a taste of real cold. I know there are many places to the north that are colder than we are, but to me, the serious cold starts when the temperature is about 10 degrees F.  At that temp and below, the forest, and I suppose our surroundings in general, seem different.

First, the air seems to lose it’s scent, and seems dry and sterile.  Although we don’t have the fine sense of smell that many other animals have, there seems to be at least a vague awareness of different odors in the air when it’s warmer.  Leaves, a distant skunk, even rain or snow all impart their own smells to the air. I envy dogs and their relatives, who have the ability to gather what appears to be a lot of information about their world in that way. There are limits, though- I’m fine with identifying deer and other animals based on the appearance of their scats rather than needing to smell them. In that regard I suppose I’m more like birds, most of which have a less developed sense of smell, rather depending on seeing and hearing to gather information about their world. When the wind is off the Lake, or just before a snowfall, usually when it’s a bit warmer, there is a distinct but indescribable pleasant odor of water and perhaps far-away places (at least in my imagination).

Second, the world sounds different when it’s really cold- snow crunches or squeaks underfoot, trees in the forest seem to stiffen and crack audibly in the cold wind.  The evergreen clubmosses and woodferns seem to be trying to deceive us into thinking that its warmer than it is or that spring is coming, but really they are biding their time like the rest of us, and trying to make the most of their photosynthetic advantage over plants which lose their leaves.

Perhaps most important to our well being is our perception of the cold and winter in general.  In their wonderful book “Winter, An Ecological Handbook” James Halfpenny and local resident Dr. Roy Ozanne talk about three types of people: chionophiles, or those who like the cold, chioneuphores who tolerate the cold, and chionophobes who abhor cold.  It seems that our optimum skin temperature relative to comfort, is about 91 degrees F, but we still perceive comfort differently. They also point out that humans actually appear to be more susceptible to cold-related injuries than many other species. Another exception would be the opossum, which like us is another species that originated in the subtropics. Poor opossums must rely on their instincts and natural adaptations to prevent frostbite to their naked feet, ears, and tails.  We humans, however, have a much greater range of behavioral advantages – the ability to make fires, build homes with heating systems, and produce extra layers of warm, loose fitting, moisture-wicking clothing.  That we suffer cold-related injuries is probably a matter of inexperience or poor planning, but it is unfortunate.

I think for many of us we move from the chioneuphore to chionophobe stages as time wears on. I don’t dread the cold, but rather manage it, and usually find that it is more tolerable – even pleasant, outside than I had expected.  If I’m not moving around much – that’s when I feel cold.  So perhaps I need to move more?  Definitely.

In terms of coping with winter cold, three images come to mind.  One is of a wood frog, burrowed into fallen leaves and frozen solid. This is an image of tolerating or surviving winter, but it seems perilous and unenjoyable. The second is of goldeneye ducks in the harbors, which swim and preen and dive in the cold water and seem to not mind at all. The third is of the chipmunk who raided my birdfeeders all summer and fall, who now sleeps peacefully underground in his den on top of a pile of sunflower seeds I supplied unintentionally.