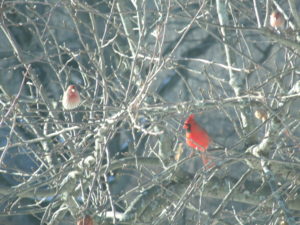 A couple of weeks ago we were still planting trees.  One probably still could, but now that we’ve reached the solstice, Yule, and Christmas seasons we are preoccupied with other things.  The world is at least temporarily covered with a “blanket” of snow- a very appropriate analogy.  The fact that water, becoming solid with cold, could fall from the sky in little assemblages of soft crystals that protect and insulate the ground and the life within it seems miraculous.  As does the fact that frozen water floats rather than sinks, if all the ice sank our waterways might freeze solid and be inhospitable to life. In truth, life has adapted to the physical properties of water, taking advantage of every opportunity those properties afford.  The landscape only appears lifeless right now, except around our birdfeeders.  Actually, billions of living things are thriving around us as they always have.

Our perception of lifelessness and darkness, and longing to see life probably gives rise to the the early Yule traditions of bringing greenery into our homes to be decorated. We light fires and string up colorful lights against the dark.  It’s a perfect time of year to celebrate the birth of a Savior, or celebrate miracles in general.

In our house there is a Christmas tree, an invasive Scotch pine which we’ve cut and decorated lavishly.  In this case, we’re doing nature a favor by removing it from the land, and yet it gets one last hurrah as the center of our holiday decorations.  Just outside the window is an apple tree next to the bird feeders- this time of year it is decorated with old dried apples, cranberries and other fruit that we’ve hung for wildlife, and house finches, cardinals, blue jays, juncos, chickadees, and even a single fox sparrow which is still hanging around, either too smart or lazy to migrate further.  To me, that apple tree, bare and in need of pruning, is the real Christmas tree – full of life and hope for next spring.  In a couple of months those birds, at least the ones which survive the Cooper’s hawk’s raids, will begin singing in force to welcome spring.  Their kind has been here forever, and their intentions seem transparent.  They do what they needto get by, living in the moment.  Even the apparent bullying of the blue jays or the Cooper’s hawk herself doesn’t seem to carry any long-term harm, lacking the malice that some people can show each other.

The landscape of Christmas is full of hidden life and hidden potential.  People are full of hidden potential too.  The best way to observe that potential in nature is to be aware of what is around you, to think about life as it is in this moment.  Perhaps we would be better off appreciating each other that way as well.  If we truly use our potential in the coming year for the benefit of the natural world and each other, wonderful things will happen.