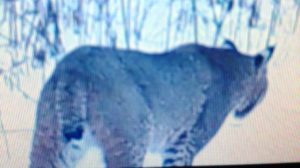 The recent snow has revealed a lot of activity at Woodland Dunes involving animals which live here but are seldom seen.  There are many fox tracks, mice, weasels, coyotes, and off the end of cattail trail – otters.  Like so much of nature, all of these things often pass unnoticed while we busy ourselves with other matters.

People who study wildlife have developed tools which eventually filter down from the hands of experts to those with a casual interest.  Some activities, out of necessity, have to be restricted to researchers because they involve catching live animals, and may risk injury to the animal. Certain tools, like location transmitters or even markers such as bird bands can cause problems.  Some technologies, like digital photography can be benign or intrusive depending on the user. Even though taking a photograph won’t hurt an animal, it is possible to harass wildlife beyond reason in trying to obtain the perfect shot.  This can be true whether the photographer is on foot or using a drone to pursue animals.

But photography certainly doesn’t have to be intrusive, and this is well illustrated by the use of trail cameras. Trail cameras are positioned in a location where wildlife is likely to be seen, but not when people are present – triggered by motion.  Cameras have come down in price to the point where almost anyone can afford to purchase and employ one on their land and the results are remarkable.  At Woodland Dunes, our staff and volunteers set out trail cameras in a number of locations to track movements of deer and other animals.  We have recorded the usual suspects- fox, coyote, owl, skunk, raccoon, mice, rabbit, squirrel, turkey, chickadee – everything we’d expect.  And then there have been some really interesting finds- a fisher, an occasional bear, otters far from the water, a badger, and most recently, a bobcat.

Bobcats have been reported several times by visitors over the years, but our staff hasn’t been able to verify the presence of the animals.  A couple of weeks ago, a neighboring landowner texted a photo wondering if it was indeed a bobcat image.  There was no doubt, and the photo was taken very near where one of the reported sightings took place a year or so ago.  That same day a bobcat was reported in Two Creeks. This week another trail cam photo was taken across the river from our preserve, and yet another from the original location off our Willow Trail.  In researching the status of bobcats in Wisconsin, I found an interesting article written by Paul Smith from the Milwaukee Jounrnal-Sentinel from September of this year.

Bobcats are found in every state among the lower 48, and it is estimated that there are about 3.5 million of them in the U.S.  In Wisconsin, like many predators, they were almost wiped out with bounties placed on them as late as the 1960’s.  Recognizing that they are important parts of the ecosystem, the DNR wisely regulated the harvest of the animals and began to study them scientifically so that a realistic management plan could be developed.  As a result, the population of bobcats is now stable and increasing, and they are again being seen in places that have been lacking them for many years.

Being seen is a relative term; however, because they are so secretive.  They are often loners and are most active at dawn and dusk.  They usually prey on small animals like mice and rabbits, along with the occasional bird or even a small deer.  Most are about three feet long and from 20-35 pounds, although a large one may be 50 pounds.  In my many years outdoors, I’ve only seen one.

Bobcats are the 41st. mammal species recorded at Woodland Dunes.  They are meant to be here, and we welcome them.  Predators like bobcats are critically important to the health of wildlife populations by maintaining a balance among prey species, and actually improve the health of their prey by removing sick and weak animals and preventing overpopulation.  Predators aren’t competing with us- they fit seamlessly into the ecosystems that we depend on for our health and enjoyment.  It is difficult to second-guess nature as to how that balance should work.  Rather than trying to bend the fabric of nature to suit us, we will be more successful if we work hard to understand nature before we alter ecosystems too much.

So, welcome back, Bob.  Its been a long time, and we’re happy you’re here.