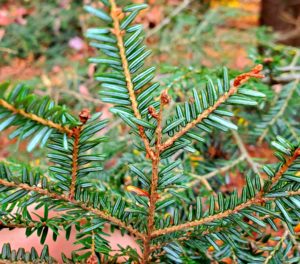 Conifers have always been my favorite type of tree. I love how they stay green all winter (besides tamarack of course) offering a glimpse of color amongst all of the white snow. Though I do like all 13 of Wisconsin’s native conifers, I do have a favorite -Eastern hemlock (Tsuga canadensis). If you have ever walked through a stand of mature hemlock trees, you might understand why, if you have not, I will try to explain.

Walking through a stand of mature hemlock trees truly feels as if you are stepping into a totally different world. Unlike the surrounding forest that is full of a variety of different trees with shrubs growing in the understory as far as you can see, this stand of trees is a stark contrast. These giant conifers tower up towards the sky, with trunks too big to wrap your arms around, with green needles glistening against the snow, and with very few other plants growing beneath them besides baby hemlock trees. It’s beautiful! Eastern hemlock trees grow to be around 60-100 feet tall and can be between 2-4 feet in diameter. One of the biggest hemlock trees measured was 175 feet tall and over 6 feet in diameter! Eastern hemlocks are incredibly slow-growing trees and sometimes can take up to 250-300 years to reach maturity. They can also live to be around 800 years old! How amazing is that?

When I walk through the old stands of hemlock trees out here on our preserve, it makes me feel as if I am walking through our preserve hundreds of years ago. Because, for the most part, that is what our forest (and Two Rivers in general) would have looked like.

Recently we received the very first written/documented land survey that was ever done where our preserve now stands. This survey was done in 1835, which is almost 190 years ago! Eastern hemlock was listed as being the dominant tree species of this area. Almost every page had it listed. Why is it that if we take a walk out on our preserve or anywhere in Two Rivers really, do we not see as many hemlock trees as there once was?

Hemlock trees, besides being absolutely stunning, are incredibly important for wildlife. They are an important shelter and food source for many different animals. Turkeys, grouse, rabbits, porcupines, deer (and many other critters) use hemlock stands for shelter. A lot of smaller animals like red squirrels, mice, birds, etc. eat the seeds. Deer also find hemlock to be delicious, which in some areas can lessen the amount of hemlock, as the deer will eat the baby trees. Our preserve has a healthy deer population, but luckily they have plenty of other food options around so there are still plenty of little hemlock trees growing in and around the stands of mature hemlock. As many as 90 different bird species including black-throated green warblers, pine siskins, Acadian flycatchers, blackburnian warblers, and crossbills all love to nest, eat, and gather in hemlock stands.

Though the larger stands are out in the state natural area away from the trails, one of our trails can offer you a glimpse at the giant conifers. Perfectly named, Conifer Trail (located off of Columbus Street) has a lot of large eastern hemlock trees right alongside the trail, in addition to a lot of other conifers and deciduous trees that were seen in the past survey. It also happens to be, in my opinion, one of the best trails to go on in the winter because all of the conifers offer a glimpse of green as you walk through the snow (and the trees block most of the cold wind, so it is a win-win!).