↓
Home Menu ↓
Skip to primary content
Skip to secondary content
I remember one of the most profound experiences of my youth, from a time when a group of family members, my dad, grandfather, uncles, and cousins drove to Canada to fish for trout, which we did a number of times over Memorial Day weekend.  The area was a couple of hours north of Sault Ste. Marie on land owned by a hydroelectric company.  We could camp wherever we wished along the dirt road which generally followed a river.  Adults slept in my grandfather’s camper, while my cousins and I were relegated to an old pup tent.  We would leave Manitowoc after work and drive until two or three A.M., then stop for a couple of hours sleep.  We youngsters would sometimes throw down our sleeping bags in the ferns and sleep under the stars.  The next morning we would arrive at a camping spot along the river and begin to fish.
We were not sophisticated fishermen- spinners and worms were the method employed.  I was a terrible at it, and spent most 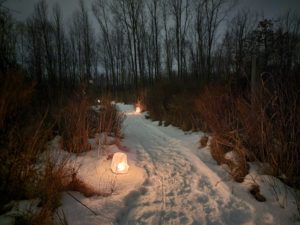 of  my time dislodging snagged spinners from underwater logs and from beneath rocks.  The adults were much better, and most of the time I flailed through the alders and over downed spruces trying to keep up as they bush-wacked along the river.
Perhaps my lack of fishing success was due in part to the fact that I didn’t really value harvesting the fish as much as just being in the north woods.  Upon shutting off the car engine, I remember being surprised at the lack of noise- there was only the sound of the river, wind in the trees, and birds singing, in particular white-throated sparrows.  When the wind died and one moved away from the river, there were times when the world was absolutely quiet.  At home in Manitowoc there was always some background noise- traffic, the daily flight from North Central Airlines to and from the airport, trains, and the like.  In the north it was truly quiet, and that became something I truly valued.  It seemed to be restorative, and it allowed me to focus on things like bird songs, tiger beetles hunting on a sandy bank, and deep thought.
Dr. Anna Akbari writes in Psychology Today about finding quiet in a chaotic world.  In the article she quotes an acoustic ecologist who feels silence is an endangered commodity now.  People equate silence with boredom, but in fact silence allows one to become present in the moment, to be able to truly focus on what is going on around us, and to effectively think about it.  When I am in a natural, quiet place, my awareness seems to expand, and I am aware of much more than I would otherwise be if distracted by noise.  I tend to seek out places where I can experience true quiet- the forest early in the morning, or places like the Boundary Waters wilderness.  It’s in those kind of places I feel refreshed and connected to the world around me.  On the right day Woodland Dunes also provides that kind of quiet, if there isn’t too much activity going on in the nearby cities and the Lake isn’t too wavy.  I think that, whether they realize it or not, it is one of the things that attracts people to a place like this, and why we feel relieved of pressure when in the woods.  Although quiet seems to be a vague and intangible commodity, it is probably more important to our well-being than we realize.