Its often the little things that make life difficult.  Like most of us, I have been surprised at the impact that a virus, a little bit of genetic material, can have on the lives of so many people.  Don’t worry- I don’t know enough about microbiology to write about it so you won’t be subjected to that here, but microscopic and invisible things rule the world, and we need to pay attention to them.

Temperature is an important aspect of the environment that is invisible, yet affects much of our lives.  We were miserable during last year’s “Polar vortex” events while this winter has been relatively easy, so far.  Then there are long-terms variations, trends which slowly develop over many years, resulting in our climate.  Our lives go by quickly, so it’s hard to appreciate or even be sure of those long-term changes unless one keeps records over the years.  Sure enough, those records, even though they are less than 150 or so years in accumulation, clearly indicate that our climate is warmer than it used to be both here and the world over.  We are perhaps lucky in that Wisconsin has a pretty moderate climate, and we here have the Lake to help moderate temperatures.  This makes our Lakeshore forests, like Woodland Dunes, rich in plant species, and all those different plants attract a lot of species of wildlife.  But if the climate changes, how will our forests be affected?

Forests, like all ecosystems, are incredibly complicated and dynamic.  Many scientists are and will be studying the changes that are happening to all the various parts of our forests.  Trees, however, are probably the first thing we notice and are relatively easy to study.  Predicting what will happen to them in the future is a challenge, however.  Using the regional tree atlas and a forest model called LANDIS, the Northern Institute of Applied Climate Science has developed a table of tree species in our region along with predictions as to what species will do well versus those which may decline. 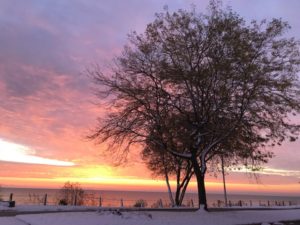 Ok- bad news first.  Trees expected to decline in coming years include balsam fir (my Christmas tree favorite), white cedar (deer eat them also), white and yellow birch, and white spruce.  Not surprisingly, these include some of our classic northern forest trees.  Others which may decrease include white pine, sugar maple, and tamarack.  Of course these are long-term projections- existing trees will hang on for a long time, but may not reproduce or thrive.

Those expected to do well as things warm include basswood, black cherry, ironwood, and the oaks.  There were mixed results for trees like the ash species (but emerald ash borer will decimate them) and red maple.    And given a warming climate, one might also try planting species that are often found south and west of here like shagbark hickory or hackberry, or even sycamores.  Species which are already found just south of here may move north as conditions permit.

As the trees go, so do other living things, and many, many species of wildlife will eventually be affected.  Once again, we are witnessing ecological reorganization.  It’s not a good thing, but it will be interesting to witness.  It will be important, even if the species are different, that we continue to care for the forests as they undergo this transition.  In doing so we will preserve our natural heritage as best we can.