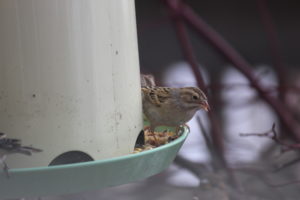 Who needs a warm and sunny winter vacation when you can spend winter here in Wisconsin instead right? Well, that is the logic that our little friend Clay has. Clay is a (very creatively named) clay-colored sparrow that has been hanging out at our bird feeders at the Dunes for the past month or so. And yes, you’ve heard that right, he is supposed to be spending winter down in the Mexico/Texas area, but decided that our bird feeders are a much better spot to vacation. Who can blame him? Plenty of shrubby cover and tall trees to shelter in. Shrubs right next to the feeders for shelter from predators, and all of the food that they can eat supplied by us…what a vacation!

Clay-colored sparrows are small sparrows that have a pinkish-colored bill and legs, a gray collar around their neck, a slightly notched tail, finely streaked crown, a pale stripe above their eye, and dark-colored cheeks. Overall, they are awfully cute little birds, but they often go unnoticed during the breeding season when they are found in this area of Wisconsin (mostly found in northern Wisconsin) as they like to hide and are fairly “dull” and small. Though you can imagine our surprise when we saw him at the feeder here in the winter!

Though we see this little bird almost daily, this bird has been incredibly difficult to photograph. We have been joking that he seems to know when we have our cameras out because he will suddenly hop to another branch or move to the other side of the feeder before we can get a good photo. Though it is not just our bird that moves around like that, clay-colored sparrows are described to be “bustling little birds” and will often quickly move from branch to branch and shrub to shrub.

Shrubs are incredibly important to this bird, not only do they prefer to feed under shrubs or within close range of shrub cover, they also play an important role in their breeding season. Male clay-colored sparrows will sit in a low shrub and sing to establish their territories (unlike a lot of other birds that will choose the highest point to sing from). Clay-colored sparrows also make their nest in the lower branches of a shrub (often less than a foot high). Speaking of songs, their song is very unique, it is said to be a flat monotonous buzzing sound that sounds a bit like: Bzzz bzzz za za.

As mentioned, our little friend should be spending his winter down near Mexico, but they are found here in Wisconsin during the breeding season. In winter they gather with small flocks and head down south, sometimes they will also join flocks of other sparrow species as they go. During winter they stay in desert grasslands, upland plains, fields, and brushy hillsides. Yet, Clay decided that he would much rather spend winter here with us in Wisconsin instead. Though it may not make sense to those of us wishing that we could be somewhere warm right now, there are plenty of shrubs around that provide him with feeding and nesting shelter, and of course, plenty of food. We are happy to have him as our winter guest and getting to see the cute little sparrow almost every day hasn’t stopped being exciting. And hey, it just goes to show that if Clay would rather vacation here instead of somewhere warm, this must be a pretty great place.