↓
Home Menu ↓
Skip to primary content
Skip to secondary content
Finally, a sunny morning.  The cool, cloudy, rainy March we just experienced only seemed to add to people’s concerns and worries.  About the only thing we can do for ourselves is go for a walk, and even my dog doesn’t appreciate that as much when it’s cloudy and gray.
But last night the sky cleared off and in the dusk there were birds calling all around.  A bald eagle, mallards, gulls flying back to the Lake, robins, and the insect-like buzzing of the American woodcock.  Woodcocks are migratory shorebirds that like grassy openings in brushy areas where they perform a complicated display on the ground and in the air to attract mates. 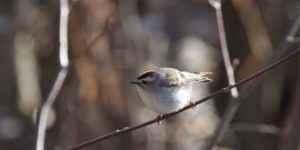 The night was clear and quiet- a good one for migrating songbirds.  The still night air makes it easier for them to fly, often at heights of several thousand feet.  They land at dawn so often the mornings following such nights are filled with the songs of birds which weren’t there the night before.  This morning a fox sparrow was singing, and at the feeders were an early white-crowned sparrow and female red-winged blackbird, along with many cardinals, tree sparrows, juncose, house finches, chickadees, and out in the marsh a bald eagle, sandhill cranes, Canada geese, and wood ducks.  The morning, in addition to the lovely warm sunshine, brought an auditory feast.  On Cattail Trail, a golden-crowned kinglet, even though they are not a rare species, was the prize, inspecting the alders for tasty insects.
Now that the snow and ice are gone, the tannin-stained, clear water of the streams and marsh are warming and coming to life. Beneath the surface are the nymphs of dragonflies, darners, damselflies, and many others.  Tadpoles of green frogs, the result of last year’s mating, are large, fat, and ready for summer to continue their lives on the surface.  They have to watch out for northern pike, which move into the grassy shallows to spawn, as does a leopard frog which is making its way to the edge of the pond where it will begin courting in a couple of weeks.
Even a short walk can be as interesting as a nature documentary because one is completely immersed in the experience – feeling the warm sun, seeing the interesting plants and animals, hearing the birds.  One does not need to know the name or classification of every organism to appreciate them, or enjoy the experience.  Nature gives itself freely to anyone with an interest.
In a few minutes on such a morning, one quickly forgets that the human world has been turned upside down.  In this case, I think a few minutes to forget problems we can’t control is good for us, and as spring progresses, I look forward to many more.
photo: Golden-crowned kinglet by Nancy Nabak