Field ants make their home in open areas, often with sandy, well-draining soil. They excavate tunnels, then carry out the soil 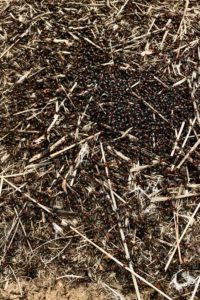 with their mandibles (mouthparts) and deposit it at the entrance. Some species, like the ones I was observing, thatch the top of their nest with twigs and grasses, allowing the sun to heat the mound and warm the chambers and tunnels inside. The temperature inside the colony is important, especially for the development of the eggs and young in the nursery chambers. All the eggs are laid by the queen and most will hatch into sterile females workers.

Ants, along with termites and many bees and wasps, are interesting insects because they are eusocial. This is the highest level of social organization and means they share a nest, cooperatively care for young and have overlapping generations within the colony. They also divide labor, with sterile members working for the benefit of a few fertile members.

Some of the behaviors of eusocial ants are fascinating. For example, I read that some species of Formica tolerate multiple queens in the same colony. These species are able to grow into supercolonies containing millions of individuals living in mounds that spread over a large area. One Argentine ant colony in Westen Europe is thought to span 3,700 miles!

My research also revealed that some new Formica colonies are created through “temporary social parasitism.” This means a new queen leaves her birth colony, invades an existing ant colony (often of another species) and takes on the scent of that group. Ants communicate using chemical signals called pheromones. The invading queen kills the original queen and the worker ants will begin to care for the invader and her eggs. Once the new queen’s eggs hatch into workers, they take over the entire nest.

Ant colony behavior isn’t always so brutal. Some European species of Formica have been observed creating a raft with their bodies to escape flooding. Ants will also work cooperatively to carefully synchronize carrying heavy objects over long distances and even up vertical walls.

There didn’t appear to be much drama among the ants I was watching. They seemed to be busy tidying up the top of the mound and likely looking for food. I am sure there was a lot of spring cleaning and preparation for the warmer season.