The sunflower – nature’s ultimate happy accessory and a symbol of loyalty and adoration. When sunflowers hit the farmer’s 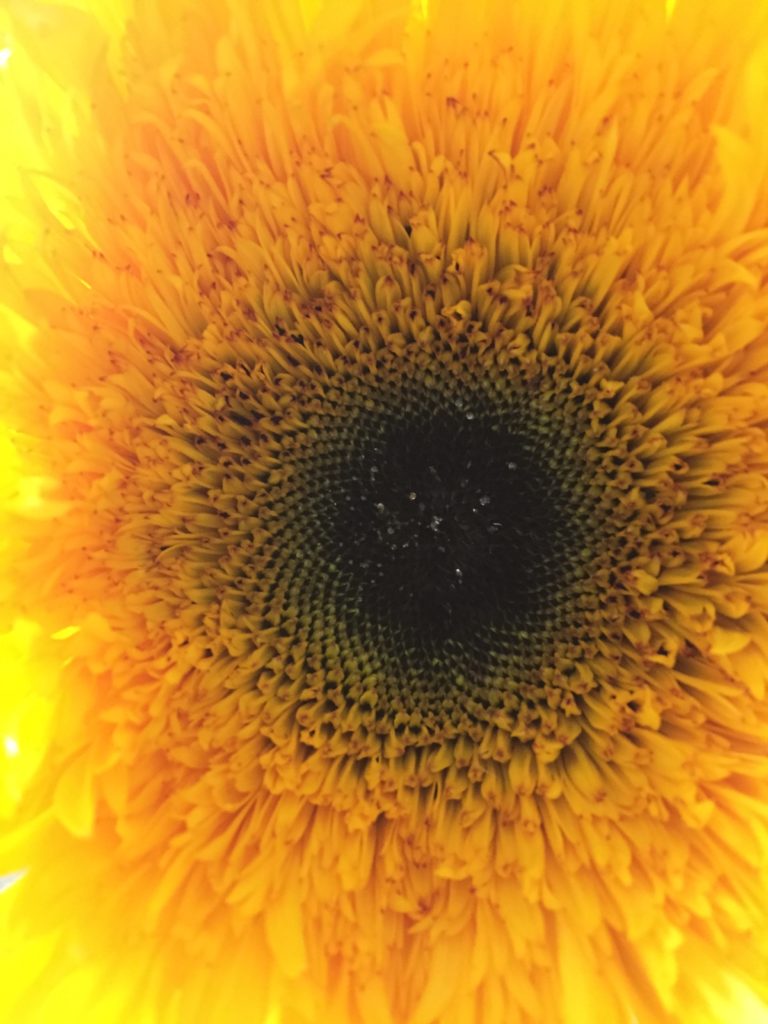 market in July, I have bouquets of their bright yellow manes in my arms. This brilliant, tall, and strong flower is currently getting worldwide attention because it is also a national symbol and major crop for the Ukraine.

Not until recently did I learn that Russia and the Ukraine together produce about 60% of the world’s sunflower oil. According to the trade group Fediol, the European Union buys around 200,000 tons of sunflower oil from the Ukraine every month. That’s a big market with big economic implications. Because of the continuing conflict in the Ukraine, some stores in Spain are already putting limits on how many bottles of oil can be purchased daily. If the conflict continues, it’s very conceivable that more sunflower crop concerns will follow.

We, the United States, are the world’s 10th largest producer of sunflowers, with most being grown in South and North Dakota. In contrast to the EU, in 2020, our country consumed about 229 metrics tons of sunflower seed oil. This is decidedly a smaller consumption, but certainly more than a drop in the bucket.

It’s true that we enjoy the sunflower for its cooking oil, but we also enjoy the flower because of the bird species it attracts. And just like people, they enjoy eating the tasty and nutritious seeds. Finches, chickadees, nuthatches, grosbeaks, cardinals, jays and even some species of woodpeckers dine on them.

Backyard birding has grown as a hobby in the last couple of years because of larger numbers of people working from home due to the pandemic. As the pandemic has progressed, so has bird feeding and sunflower demand. In fact, according to Packaged Facts, the annual US sales in wild bird food and feeders in 2021 was estimated at a whopping $2.2 billion dollars.

It’s hard to imagine topping a statistic like that, but there’s even more to this economically powerful and bird-friendly flower. There’s something so magnetic, something so special about sunflowers – they’ve been captivating us for centuries. And as a storyteller species, we like to explain our behaviors, questions, and curiosities through, well, stories.

The sunflower, as told in Greek mythology, relates to the water nymph, Clytie, who fell in love with the Sun God, Apollo. At first, Apollo loved her back, but then he fell in love with Leucothoe. Clytie became jealous and told Leucothoe’s father of their relationship. In true mythology form, he punished his daughter by burying her alive. This angered Apollo whom then turned Clytie into a flower, one that resembled the sun. Even as a flower; however, Clytie still loved Apollo and spent all of her days watching him move the sun across the sky in his chariot. This broken love story explained why sunflowers move to face the sun.

Or do they? Myth busting alert – in reality, sunflowers do follow the sun, but it’s only the buds and leaves of the sunflower which display sun- turning behavior throughout the day (called heliotropism).  Once a head of the plant has flowered though, it’s no longer heliotropic. It then remains fixed facing the east where the sun rises.

The sunflower gives us many gifts to be grateful for, but there’s one more gift that I haven’t touched on yet. The sunflower makes you feel like a hippie – a free spirit and full of joy. I was born generationally too late to be part of the original hippie culture, but I say we’re never too late to feel free and joyful.

To our friends in the Ukraine, continue to embrace your sunflower.  Stand tall, stay strong, and channel your inner freedom. Just as the sunflower, you shine brightly in our hearts.

photo of sunflower by Nancy Nabak