From my first week of working here as an intern, I couldn’t help but notice the many frogs hopping along the trails. On Willow trail especially, many would blend in with the grass, occasionally surprising me while I was helping assemble a boardwalk. I have always been fascinated with frogs, and recall various memories of me catching them at my grandparents’ cottage as a kid, watching them hop around the lake until it was time to leave. One summer we even raised tadpoles and watched as they underwent a metamorphosis. The specific frog I saw on the trail had a greenish coloring with dark black spots down its back, sides, and legs; all traits that point to the Northern Leopard frog. 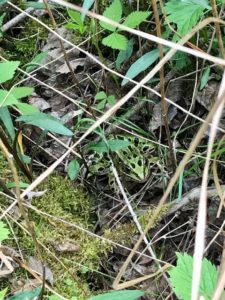 The Northern Leopard frog is found in a variety of wetland habitats and lives mostly in northern North America. These spotted amphibians also reside in grasslands, giving them their other common name; the meadow frog.

You might recall that as a child, you were told that frogs eat flies, but in reality, their diets are varied. This frog is an opportunistic feeder, which means it can eat just about anything it can fit into its mouth! It eats a variety of insects such as beetles, ants, and slugs. They have even been known to eat small birds and snakes. As young tadpoles, they begin by only eating algae and rotting plants before growing and developing their varied diets.

Their breeding season runs from late April to early June. Males float on top of the water and call out with a low grunting sound to attract females. Females can lay as many as 5,000 eggs! The eggs laid will typically hatch in about 9 days, and tadpoles undergo a metamorphosis in late July where their tails recede and their arms and legs grow. A group of frogs is called an army, which I thought was a fun fact to think about. These frogs take two years to reach maturity and live an average of four years in the wild.

Since the 1970s, their numbers have slowly been declining, especially in Canada and the Western parts of the United States. Factors responsible for this decline are pollution, deforestation, and water acidity. Agriculture, the draining of swamps, and clear-cutting for land and lumber are destroying the frogs’ habitat. Contamination of their habitat from fertilizers,
pesticides, and urban runoff are other factors making it difficult for the survival of this species in some areas.

What can one do to help these spotted amphibians? Fellow frog lovers can start by using environmentally friendly alternatives to household chemicals, and making sure they dispose of chemicals properly versus dumping them down the drain. Using gardening products that are environmentally friendly can help as well, by replacing fertilizers with compost which serves as a more natural fertilizer. This will also help our landfills since 30 percent of household waste is made up of compostable scraps. Using natural pest control methods will cut back on urban runoff and provide families with a chemical-free yard to enjoy too!