Recently I was weeding outside and noticed a couple of fuzzy black and yellow insects flying low to the ground. I initially thought they were bumblebees, but upon further inspection, I realized they were mining bees. I observed as one popped out of the sandy soil, then flew to a nearby dandelion.

Mining bees are native to Wisconsin and are one of the earliest bees seen in the spring. They are one of over 1200 solitary bees 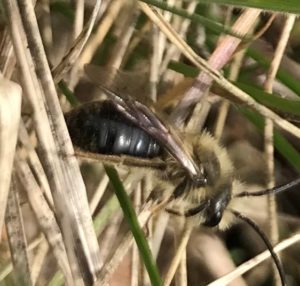 in North America and are often mistaken for bumblebees because of their stout build and furry body. However, they are much smaller than a bumblebee, sizing up to a quarter to a half inch in length. They are non-aggressive insects and rarely sting.

Mining bees get their name because they tunnel into the ground to make their nests. They prefer to dig into well-drained soils and will also burrow in areas between stones in old buildings or between logs in cabins or barns.

Once a nesting location is chosen, the female will excavate a vertical tunnel a few inches deep with an entrance that is about the diameter of a number two pencil. A sure sign of a mining bee nest is a pile of dirt left near the entrance. Mining bees may nest in the same location for several years. Mining bees tolerate each other and if many nests are clustered together, females only provide for their own.

Each tunnel has several side branches with chambers for the eggs. The female waterproofs the cells using a waxy substance she creates from a gland in her abdomen. To provide for her future offspring, the female will also leave rolled up balls of nectar and pollen in each chamber. Once she’s mated with a male, she will lay a single egg on top of the food provisions and then seal the chamber off.

Once the eggs hatch, the larvae stay in the chamber and eat the food that was provided for them. Then they overwinter in a prepupae state and will not emerge until spring. They live for about one month after emerging to reproduce.

Mining bees are buzz pollinators which means they vibrate their flight muscles and cause the flower to give up its pollen. The loose pollen then gets stuck in the mining bee’s hairy legs and body. Mining bees are important pollinators in the Midwest for wildflowers, apples, other fruit trees, blueberries, huckleberries and orchids.

Mining bees are just one of many interesting native pollinators in Wisconsin. There is so much variety in the insect world and even the smallest of these creatures is worthy of appreciation.