All around us are potentially great experiences that go unrecognized.  Sometimes they involve new places or things, and sometimes familiar places under different circumstances.

An example of the latter is the world at night.  We are outdoors longer with the extended daylight, but still retreat indoors, for good reason, when it’s dark.  The world that becomes apparent in the night is just as interesting as the day.  One excuse to observe the nocturnal world is to participate in the Wisconsin Frog and Toad Survey.  I had the opportunity to do so on survey route # 363 which takes place in northeastern Manitowoc County.

The routes are actually surveyed three times during the course of the amphibian breeding period, because different frogs breed at different water temperatures.  In April, the early breeders, whose songs are often familiar, are at their most amorous, and the first survey route is run during the last half of the month when water temperatures in the breeding ponds are about 50 degrees F. 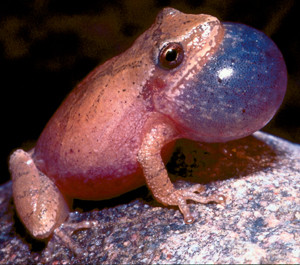 The night I participated in the survey was clear, cool, and calm, with a first quarter moon shining softly over the landscape.  The survey is conducted by stopping to listen at different pre-designated locations for five minutes, recording the species and abundance of frogs or toads heard.  I was hoping to hear all four of the early singing frogs- wood frogs, spring peepers, leopard frogs, and chorus frogs, that are normally found around here. Because the early part of April had some warm days I think, the wood frogs were already finished singing and only one was recorded out of the 10 survey points.  Spring peepers were the most numerous frogs heard, their chorus sounding like jingling sleighbells when many were present.  On several stops, a few leopard frogs were heard.  Unfortunately, I was skunked as far as chorus frogs go, and am wondering if the dry spring left them without the field puddles they typically frequent.

A car parked at night along a country road understandably generates some interest, and even though I tried to look very scientific with time and clipboard in hand a few people stopped to ask what was going on or if I needed help.  I don’t think someone conducting a frog survey was what they expected. 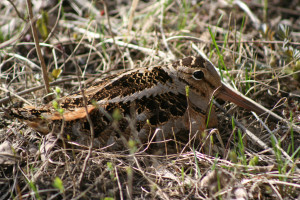 On that beautiful night there were birds to be heard too- American woodcock were doing courtship displays, and small songbirds, migrating north during the night, could occasionally be heard issuing their flight call notes.  Their faint peeps from the beautiful clear sky was a reminder of the  millions of birds migrating overhead sometimes thousands of feet above ground, fighting their way north for a chance to insure survival of their species.  We can’t see this unless we use radar, and even then these beautiful creatures are reduced in image to fuzzy green masses superimposed on a map.  But in the night, you can hear them an know for yourself that they are there.

There is something about the dark, the night sky, and the sounds of animals you can’t see that is inspiring and humbling.  The reminder of how some component of nature uses every minute of every day expands our awareness and sometimes staggers the mind.  I hope you all have many opportunities to experience and be inspired by the world around you from many different perspectives.