This article was written by summer intern Nick Lardinois.

These are exciting times at Woodland Dunes. Between Mothers’ Day and Fathers’ Day, we welcomed a new mother and father into our lives! In early April, a pair of ospreys chose one of our platforms to build a nest and raise their young. After a 5-6 week incubation period filled with endless nest maintenance, shooing away pesky red-wing blackbirds, and impressive displays of dedication through inclement weather, the young ospreys began to hatch. The clutch size of an osprey is generally 1-4 eggs, but often one egg does not hatch because of the immense amount of time and resources incubation requires, as well as the delicate nature of the egg itself. The first baby osprey emerged on Monday, June 2nd and the third, and final, egg hatched a few days later on Friday, June 6th.

Like most birds, the first young to hatch has a significant advantage over their siblings with a head-start on nutrition and consequently, size. The diet of an osprey is 99% live fish, mostly brown bullhead, rock bass, bluegill, pumpkinseed, white sucker, large and smallmouth bass, yellow perch, and even carp. A nest of three osprey chicks, such as at Woodland Dunes, requires at least six pounds of fish a day, not to mention food for mom and dad! The father does most of the fishing, with success rates of up to 70%. Nestlings compete for the food of their parents’ prosperous fishing trips. On occasion, the youngest may starve to death if the older siblings were born several days earlier and have established a firm, dominant pecking order. 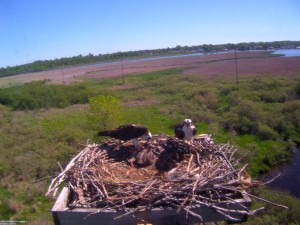 The success of a young osprey is important, however. Ospreys are near the top of the food chain, with their only occasional predators being bald eagles and the great horned owl. As a result of being an apex predator, the osprey plays a significant role in balancing ecosystems. As Aldo Leopold, the great Wisconsin environmentalist, wrote in his famous excerpt on “thinking like a mountain”, the health of an ecosystem depends greatly on the interconnectedness of all species. The absence of ospreys could have unknown and undesired consequences for other species.

Since the osprey is a well-studied, and an easily identifiable bird, they provide a critical portal to the status of an ecosystem. Being a top predator and living long lives creates a sensitivity in osprey to many environmental stresses. Coupled with the expansive knowledge about the species over decades of research allows for osprey to be an intimate and readily-available assessment of the surrounding natural world.

Ospreys are exceptional bio-indicators, or a gateway to view the health and productivity of the surrounding environment. From the 1940’s through the 1970’s, osprey population declined 90% as a result of increasing chemicals, most notably DDT and PCB. The appearance of environmental pollutants such as these are often hard to notice, measure, and monitor except for in large, predacious birds. Abundant toxic insecticides and herbicides can accumulate in fish which the osprey later consume. As a result, the delicate balance of chemicals within the bird is upset and can lead to outright deaths or compromised child-rearing capabilities. Today, the osprey is on a profound rebound in part to ban on certain chemicals such as DDT and successful conservation efforts.

The birth of three young ospreys at Woodland Dunes is something to be Celebrated, as the births prove the immediate environment is healthy and productive enough to support such a delicate and important bird. Once mature three years later, ospreys have been known to return to their birthplace to raise their own generation of young. Let’s hope we can continue the great work in the community to support the health of our neighboring ecosystems and encourage the newborn ospreys to someday return.