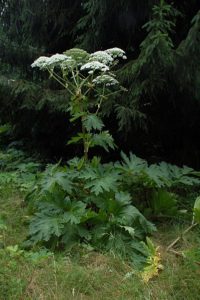 Summer is right around the corner which means we are starting to see some familiar plants!  You may notice some new large plants on the edge of your property, along waterways, or on the tree line of your local woodland. Although new plants are exciting to find, there is a dangerous invasive species close to our area.  Heracleum Mantegazzianum is a plant that you have probably heard about in the recent past. Known more commonly as Giant Hogweed, this is a harmful nonnative that grows in moist soil anywhere it can. Due to this year’s immensely wet spring/early summer, Giant Hogweed will most likely continue to thrive in the six Wisconsin counties where its presence has already been confirmed.

Giant Hogweed is a very robust, stalky plant. The plant can grow an average of eight to twenty feet which easily crowds out all surrounding native plant species. The flowers of this plant are mainly white with large umbels. Hogweed is commonly misidentified as American Cow Parsnip, but unlike Giant Hogweed which is native to Asia, American Cow Parsnip is native to Wisconsin.

You may be wondering “How do I tell the two plants apart if they look so similar?” Luckily, we have two easy ways to tell the difference. First, Giant Hogweed is the larger of the two growing up to twenty feet tall. American Cow Parsnip only grows three to seven feet tall. Secondly, upon closer observation, Giant Hogweed has a single leaf structure with lobes that look like a hand with finger, while American Cow Parsnip has leaves similar to the shape of Maple tree leaves.

Not only is Giant Hogweed harmful to native plants, but it’s also hazardous for humans as well. When getting rid of Hogweed it is highly suggested that clothing cover all skin and protective wear for your eyes and face is utilized. Giant Hogweed possesses sap that is released when the plant is cut or damaged. If this sap gets on your skin, it will undergo a process called phytophotodermatitis. If the affected skin comes into contact with sunlight it can cause burns, rashes, blisters, and discoloration that can last several years. To combat the damage that the sap can cause, quickly wash the affected area with cold water and keep the area cool, dry, and out of sunlight. To combat the spread of the plant itself, there are two options. The first of which would be manual removal using a shovel to dig one to two inches below the plant to remove it from the ground. The entire plant can then be burned or bagged for landfill disposal. The second way is the chemical route which involves the use of a foliar spray or cut-stump method followed by treatment of herbicide.

Giant Hogweed is an invasive which is harmful to everything that it comes in contact with, whether it be humans, animals, or native plant species. Even though Giant Hogweed was originally brought to America as an ornamental plant, there’s nothing pretty about it.