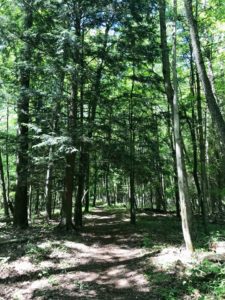 In the last few months, a lot of people have visited the trails and outdoor facilities at Woodland Dunes.  We enjoy being a sanctuary not only for wildlife, but for people who need the calming, healing touch that nature gives.  A few trails are wet, but most are in good shape, although boardwalks are always in need of repair.  There are distinct contrasts between the open, sunny, breezy habitats, and those of the deep forest.

Since the mid-1960’s, when Woodland Dunes was but a dream, we have surveyed birds to track the species and numbers of them over time.  There are many such areas in the country and world where such counts are done, but not as many that have been surveyed as long as our preserve.  To do the surveys, we visit predetermined spots, or points, located so we can find them year after year.  Often they are at trail intersections, and where they aren’t a GPS helps to put us in the right location.  Once there, we count each bird seen or heard for 10 minutes- enough time that we are reasonably certain to find most of the birds in the area.

This morning I surveyed several such points- one in brushy habitat, and three in the deep forest.  To be out in the forest early in the morning can be an almost magical experience, and today was no exception.

One of today’s points was about a half-mile from the road where I left my car.  To reach it involved slogging through some standing water and climbing over a few downed trees.  Vegetation was wet from yesterdays’ evening rain, and I wished I had worn a rain jacket.  Mosquitoes, usually thick by now, were tolerable, and didn’t distract from the task at hand.

When I reached the point, there was a bit of commotion from a pair of downy woodpeckers- while usually quiet, these downy’s produced a harsh alarm call as soon as I came into the area- I suspect they had a nest nearby.  They were obviously none too happy.  They continued to squawk as I set my timer, and an interesting thing then happened- other birds began to fly in to see what the problem was.  So, rather than straining to hear their calls far off in the forest, they came to me!  One by one- a robin, a black and white warbler, a black-throated green warbler, a chickadee, two house wrens, a northern waterthrush, a hairy woopecker- all came to the particular group of trees where the downy’s apparently were concerned about.  Far off another woopecker, a pileated, sang, and an ovenbird.  The birds in front of me moved among the trees, not as concerned as the downys.  After five minutes they all settled down, picking among the leaves for their insect breakfasts, and eventually scattering back into the forest to continue their days.One wonders what their lives are like, spending so much time in the quiet forest.  I must say I envy them on mornings like these.  Perhaps not so much when mosquitoes are out in full force as they will be soon, or during the storms that send trees crashing to earth.  Then, abruptly, my 10 minutes is up, and its time to head back.

In several mornings so far, we have recorded 74 species of birds in our preserve.  Some of them, like the black and white 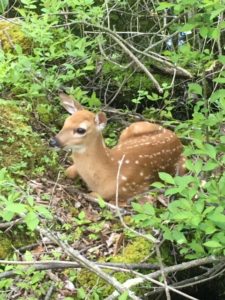 warbler, Canada warbler, and white-throated sparrow are usually found nesting far north of here.  We don’t seem to find as many of those as we used to, but it is reassuring that some still choose to be here.  Surveys, properly done, help us know how birds in general are doing, and hopefully help us decide what kind of protection and help they might need.

These surveys also allow us to look at the wildflowers, the health of trees, and other aspects of the preserve.  This year a doe parked her small fawn right next to the trail- it looked at us with apparent curiosity as we passed by.  I like to think of it as an escape to reality rather than from it, and no matter how often I go to such places, I feel I should do it more often.