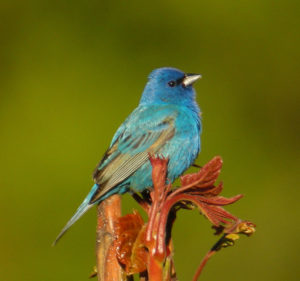 As usual, summer seemed to come on suddenly here after a cold spring.  Leaf-out was delayed a bit, and that allows us to better see the migratory birds as they hunt for insects in the trees.  Fortunately, they are busy with their usual activities and are unaware of the challenges that humans are facing these days.

Despite the fact that many migratory birds are declining in population, there have been many interesting birds here in our preserve.  So many follow the shore of Lake Michigan during migration both north and south, and we are privileged to catch a glimpse of them as they pass by, or, we hope, get ready to nest here and spend the summer.

Out in the marsh off Cattail Trail there have been several interesting wading birds present.  We’re all used to seeing great blue herons, but with them this spring have been both American and least bitterns, and sora and Virginia rails.  All four of these species are rather secretive and often only give away their presence by their calls from the cattails.  American bitterns make a gulping sound, while least bitterns coo like a mourning dove.  Virginia rails click, and soras whinny from the marsh.  An American coot has been calling, sounding like monkeys in a jungle, while overhead Caspian terns give a harsh, screeching call.  Ospreys pass over, and across the rive a pair of bald eagles tend to their nest and young.  Smaller birds also call from the marsh- red winged blackbirds, marsh and sedge wrens, and yellow and common yellowthroat warblers.

On the wooded trails- Willow, Yellow Birch, Black Cherry, Trillium, and the Ice Age Trail, dozens of species are calling.  In brushy areas catbirds, veerys, American redstarts, robins, and many others are lurking.  In the forest, both house and winter wrens, ovenbirds, northern waterthrushes, red-shouldered hawks, great crested flycatchers, wood pewees, several woodpeckers, and our familiar chickadees and nuthatches are all busy with their summer duties.  Some special birds are also present- Canada and black-throated green warblers, indigo buntings, chimney swifts, and others.  It must be exhausting for them to complete a long migration followed by intense child-rearing.

All this activity, and yet it is only a small portion of the many natural cycles that are going on right now among plants, mammals, insects, and all the creatures of the natural world.  Now is a particularly good time to immerse oneself in nature, with the added sounds, smells, and textures in the forest.  Add to that the need we have to remove ourselves once in a while from the world of people to places where we are free from our conflicts, where we can learn freely.  And where there is more to learn than we will ever know.

Enjoy the natural world at this, its busiest season.  The discoveries that await us will help us manage an ever more complicated world.