At least once every June, an event occurs that tells me summer is right around the corner. This event would happen even when I was a young girl. It happens when I am outside close to dusk enjoying a campfire or walking my dog. Suddenly, bam! A june bug will crash into my head and get caught in my wavy hair. I can hear the insect’s buzzing as it dislodges its hairy legs from my hair and flies away. These bugs, which are actually beetles, also bombard the windows at night because they are attracted to the light within house. For me, the arrival of these clumsy insects marks the beginning of summer. 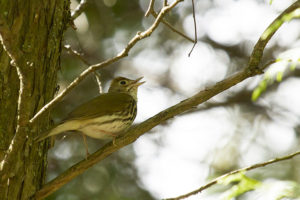 There are other sounds associated with the onset of summer. A few hearty songbirds will sing through the day, until dusk. American Robins sing their bright “cheerily, cheer-up!” song and the Gray Catbird combines a series of odd sounds, imitations and even sings a raspy “mew!” that sounds like a cat’s meow. Common nighthawks make an appearance at dusk. They gracefully swoop through the sky, eating insects and periodically make a sharp, “peent!” call.

Though they are silent, fireflies are another sign that summer is almost here. These enchanting insects create light through a chemical reaction inside the lamp organ, which is located on the last few segments of their abdomen. The male fireflies flash as they patrol the air to advertise to the females, who wait on the ground or perched on a plant or shrub. If a female is interested, she will respond by flashing back. About ten years ago on a late May evening, I walked among so many fireflies that the trees and understory plants in the forest around me looked as though there were decorated with holiday lights! It was truly a magical sight that I will never forget.

American toads and gray tree frogs can also be heard singing away during the day and in the evening. Their voices carry quite a distance because of the use of vocal sacs. When singing, they close their mouth and nostrils and push air from the lungs through the larynx and into the vocal sacs. The vibrations of the larynx make a sound that is amplified by the sac and hopefully attracts the attention of females in the area.

Many sounds of early summer can also be heard during the day. There is a chorus of bird songs in the preserve that is best enjoyed in the early mornings or later in the afternoon. Ovenbirds frantically chant, “Teacher! Teacher! Teacher! Teacher!” The red-eyed vireos lazily sing, “Here I am. Up here. In the tree. At the top. Vireo.” Bumble bees buzz as they collect pollen from the various plants that are in bloom. The crickets have also started to call. They stridulate, or produce a chirping sound through friction. They rub a “scrape” at the base of one of the forewings against a “file” located on the base of the other, like a thumbnail on a comb.

Spending time outdoors in the late spring is truly a multi-sensory experience!

photo of Ovenbird by Nancy Nabak