The pair of ospreys nesting near the Nature Center headquarters now have young to care for.  Interestingly, the eggs here hatched on virtually the same days that eggs were hatching at Collins Marsh despite it being cooler here.  We’ve admired how dedicated the parents are- sitting atop a 50- foot tall pole often moving in the wind through a month which included many days of ugly cold, rainy, or stormy weather while surviving on a diet of cold, raw fish is a testament to the will of these animals to bring their young into the world.  Now they will be forced to feed those young continually for several months while putting up with constant begging.  We humans give up lots of sleep to raise our young, but sometimes I wonder if we would survive childrearing the way ospreys do it.

That ospreys nested on a platform with a camera on it allows us to watch and appreciate what their lives are like.  It’s a shame to think that they were almost lost from this Earth at one time due to our lack of understanding of how toxic insecticides can be.  Being able to see them every day reminds us that raptors are very special birds, and that we’re lucky to be able to share the world with them.  But ospreys aren’t the only raptors that are seen daily in our area- the Lakeshore is an outstanding place to see a number of fascinating predatory birds.

For example, while a group of parents and children were here recently, a pair of bald eagles, seen frequently and probably nesting nearby, flew a little to close to the osprey platform and cause to the ospreys to energetically drive them away.   When I was young it was rare to see bald eagles around here, but now there are several nesting pairs in Manitowoc County and it’s not unusual to see them overhead.  Migrating eagles also visit our area in winter, scavenging carcasses and taking fish if there is open water. 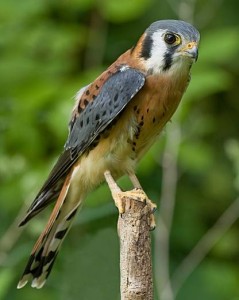 Then there are falcons- we are so fortunate to have all three species that nest in Wisconsin right in Manitowoc and Two Rivers.  All falcons are swift flyers with pointed wings.  The American kestrel is the smallest, and likes open farmland and roadsides.  They are seen daily perched on wires along Hwy 310 west of Woodland Dunes and in the area around Rockwood, among other places.  They are the size of a mourning dove, and are nimble flyers which prey on small rodents and birds, and large insects.  Slight larger are merlins, dark and streaky falcons which have in recent years taken to nesting within the cities of both Manitowoc and Two Rivers.  The largest around here is the peregrine falcon, a pair of which are again nesting in Manitowoc and are frequently seen along the Lakeshore.

Accipiters are also swift-flying hawks that sometimes upset people by taking small birds right off of bird feeders.  They have short wings and can maneuver deftly among branches, and are at home in both forests and backyards.  We have two species here that are frequently seen- the Cooper’s hawk and the sharp-shinned hawk.  They differ in size by both species and sex- Coopers larger than sharp-shinned and females larger than males.  Despite the size difference they can be difficult to discriminate, but they are both amazing species.

Buteos are larger and chunkier than most accipiters, and we also have two species being seen right now- the red-tailed hawk of suburban and rural open lands, and the red-shouldered hawk, much rarer, which we suspect are again nesting in the wooded swamps of our preserve.

Last but not least, vultures are also considered raptors, and the turkey vulture is becoming common in our area.  When I was introduced to birdwatching it was unusual to see these southern birds here, but each year there seem to be more and more, and they are found into Canada now, perhaps due to a warming climate.

Right now, in and above our community, it’s likely to find nine species of raptors, which add so much interest to birdwatching.  As we found with eagles, ospreys, and pesticides, the raptors are a sensitive group, and the state of their well-being likely reflects our own.  They are a very special group of birds, and their diversity here reminds us that we live in a special place.