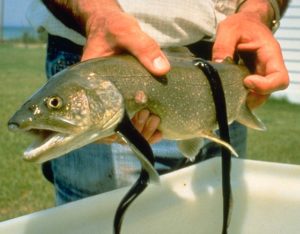 Excessive sea lamprey populations have been causing problems in the Great Lakes for many decades, first appearing in Lake Erie in 1921, and continuing to invade the Great Lakes into the mid 1900s. Using their heavily-toothed mouths to attach to and feed on fish, these invasive aquatic species contribute greatly to native fish populations’ decline. That’s why the U.S. Fish and Wildlife Service conducts surveys and control projects within the Great Lakes to monitor these deadly creatures. We had the good fortune of joining two U.S. Fish and Wildlife Service employees as they went out to Forget Me Not Creek in Two Rivers to collect data for their sea lamprey survey. It had rained heavily the night before we went out electroshocking- the process used to gather sea lamprey specimen for data collection – meaning the test site’s water levels were high, and the water was fairly turbid, or cloudy. Geared up in tan waders with electrofishers, the machines used for electroshocking, secured to their backs, our trusted lamprey guides seemed to have come right out of the movie Ghostbusters.

Up to their knees in murky creek water which resembled chocolate milk, nets outstretched in front of them, the U.S. Fish and Wildlife Service workers began to electroshock. The process of electroshocking includes going along the edges of the stream, using a pulse to disturb the lampreys from their resting place in stream bed sediments, then utilizing a higher voltage shock to immobilize and capture them. This particular morning, however, with the water high and murky, the low visibility prohibited our lamprey experts from catching any of the invasive creatures for their survey. Usually, after catching sea lamprey samples from their given test site, the US Fish and Wildlife Service workers will bring them back to their truck for identification, where they have to distinguish between native and invasive lamprey species. Using the lip, dorsal fin, and pigmentation, a seasoned worker can quickly identify a native versus an invasive lamprey. For example, when looking at the lip, a window shape indicates a native lamprey, whereas a white “mustache” or “lipstick” appearance on the lip indicates an invasive sea lamprey.

Most people likely think of lampreys as purely invasive, but in fact there are four native lamprey populations within the Great Lakes area: Silver, Chestnut, American Brook, and Northern Brook lamprey. These native species are not the notoriously destructive invasive sea lamprey that first come to mind. In fact, two out of the four native species, the American Brook and Northern Brook, are not even parasitic. Only the silver and chestnut lamprey act as a parasite like the notorious sea lamprey, and even then, are not considered much of a destructive threat to native fish populations. The parasitic sea lamprey, however, is considered much more dangerous and deadly. According to the U.S. Fish and Wildlife Service, an adult sea lamprey will kill around 40 pounds of fish within its lifetime, potentially more. A fish that has been attacked by a sea lamprey only has roughly a 15% chance of survival, while a fish attacked by a native lamprey rarely ends in fatality.

Even though sea lamprey often go unseen, the threat they pose to native fish populations is very much a reality. With current and past efforts from the U.S. Fish and Wildlife Service, the Great Lakes has seen a 90% reduction in sea lamprey populations in the majority of treated sites, meaning safer and healthier waters for native fish.

photo- sea lamprey on a lake trout from Wikipedia