As many children have done, when I was younger, I often looked to the sky to see what shapes the clouds were forming. With a 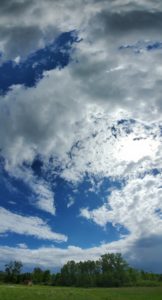 little imagination, the clouds can transform into dragons, bunnies, cars, and even faces. As someone who has been described as having “my head in the clouds,” I still find myself looking into the sky with curiosity as I did when I was young.

Stopping to look at nature not only around us but also above us is a good way to let our minds wander and body relax. Thousands of feet above our head clouds frequently go unnoticed unless we’re looking for shade or looking to see what the upcoming weather might be. When we think of the word “cloud” often the white fluffy clouds that we all drew as children on our art projects come to mind, but there are roughly ten different types of clouds that can occur depending on the weather.

Occurring on humid days and called “sheep backs,” altocumulus clouds look like fluffy herds of sheep in the sky. If you go to grab an umbrella, it’s likely that you saw a nimbostratus cloud as these are the dark clouds that lead to rain (or snow!). On days where a warm front will be rolling in the blue-gray clouds known as the altostratus clouds will begin to cover the sky.

Latin for “curl of hair” and covering the sky in thin wisps, cirrus clouds will appear in calm weather. Cirrocumulus clouds made of ice crystals can be seen forming as a sea of ripples across the sky on “warmer” winter days. Occurring when there are large amounts of moisture in the air, the cirrostratus cloud forms a halo of light around the moon or sun and make for very beautiful pictures. 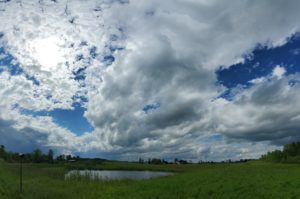 And as of lately, we’ve become familiar with these clouds – known as thunderstorm clouds, the cumulonimbus clouds are large and fluffy (similar to cumulus) but create large dark towers within the sky. These clouds indicate severe weather, so if you see these you might want to rethink being outside for a bit!

Coming in many different shapes and sizes and offering a unique view every single day clouds are nature’s way of telling us what the weather will be like. Looking up at the clouds is not only a fun activity that can be done by children (including myself and hopefully you, too), but can also help us be prepared for what the day might bring. I know that regardless of what I’m supposed to be doing, I’ll find myself looking up at the clouds hoping to see new shapes within them. I hope you take the time to stop and let your brain wander and creativity to flourish as you too find the shapes within the sky.