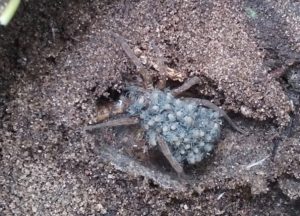 Wolf spider with babies on its back

It is amazing the wildlife we encounter in the smallest and simplest of places.  Recently while out tending to the butterfly garden at Woodland Dunes Nature Center, a couple of our interns and I noticed a “lumpy-backed” spider.  There were other smaller spiders crawling off of it.  Upon further inspection, the spider was carrying its babies on its back.  This experience inspired me to find out more about this nurturing spider.

Wolf spiders belong to the family Lycosidae.  There are over 2,000 species of wolf spiders and they live all over the world.  This particular spider was found under a rock near a pond feature.  While wolf spiders do have spinnerets (the structures that produce silk) they do not form webs.  Instead, they hunt for their food mainly at night.  The spinnerets are used to form a silk egg sac, which the female uses to carry around her young.  When the eggs hatch, the young, known as spiderlings, crawl on their mother’s back.  She will carry them around for several days or even weeks.

Wolf spiders are solitary and once the spiderlings are old enough they will disperse to find their own food.  Male wolf spiders live approximately one year and females can live for several years.  Wolf spiders display sexual dimorphism, which is a difference in size or appearance between the sexes of an animal.   In the case of the wolf spider, females are larger.

While wolf spiders are considered great hunters, they are also prey. Other spiders, wasps, ants, birds, small reptiles, toads and other amphibians, and even some rodents are predators of wolf spiders.  The wolf spider can try to escape predators using their speed and camouflage.  They will also bite if necessary.  We didn’t wait around to see if this particular spider viewed us as a threat.

After a quick examination of this interesting family, we gently replaced the rock and returned to our tasks.  Every trip in nature provides an opportunity for a new experience.  Even something as simple as weeding a garden and rearranging some landscaping allows a peek at a world different than our own.