Recently I had the great pleasure of spending some quiet time with wildlife in the Boundary Waters.  Our family’s wilderness trips aren’t about how many miles we can cover or fish we can catch- they are more centered on enjoying the life around us, reading, and appreciating each other’s company.  Mid August in the northwoods is a time of preparation, and one can see it all around.  Birds are finishing their parental duties for the year, rodents are feeding and storing various foods, insect populations are high, and plants are producing all sorts of fruit.

It was interesting to note the fellow summer residents in and around our campsite.  After a day it was very apparent who our neighbors were.  The first and perhaps most obvious were a family of white-throated sparrows.  These birds nest in the north (and at Woodland Dunes) in areas with lots of conifers and brush.  The young birds in our campsite were begging frequently even though they were old enough to fly and presumably forage for themselves, and the adults appeared to react to their complaining almost frantically- gathering beakfuls of ants on one trip and thimbleberries the next, bringing them to their dusky offspring.  Occasionally the adults would take a break and fend for themselves, enjoying the last of the service berries or other fruit. 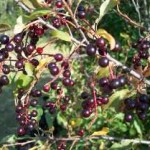 To our south was a swampy area with a stream, in which a northern waterthrush still sang- pretty late in the year for that.  To the northwest a Canada warbler sang briefly each morning, and also brought young in to feed among the bushes.  We were on the shore of a large lake, and every large bay within seemed to have a pair of loons with 1-3 young.  Some of them were nearly as large as their parents, while others were still brown and downy.  Loons emit several different calls, and after a while one can tell the difference in the calls produced when another loon flies over versus a raptor like a  bald eagle.

Speaking of eagles, a nest was located across the lake on the Canadian side, and the young it contained shrieked loudly when their parent’s appeared.  Their begging calls seemed remarkably similar to the ospreys at the nature center, or young red-tailed hawks.  In all those cases, their calls are enough to make this parent shudder- I’m glad my offspring are past the shrieking stage!

A very bold red squirrel harvested cones from the alder bushes, something I had not seen before.  Later in fall, I assume when they are further ripened, the reds gather pine cones which they peel and store away.  A least chipmunk, smaller and more striped than our eastern chipmunks, sneaked around our site and fortunately did not beg for or try to swipe our food, and for some reason a short-tailed shrew decided that the space beneath the floor of a tent was just perfect and made himself at home very close to us.

During the day bluet damselflies of some species or other daintily flitted among shrubs on the shore, along with some larger dragonflies of the darner group.  At dusk the mosquito population increased and so did those dragons, picking off mosquitoes and deer flies in mid air with our encouragement.  Also at dusk, beavers appear to begin their night’s work of cutting alder shrubs for food and home improvement.

We marvel at all of these creatures and how they behave.  That there is so much wildlife at this place is no surprise with all the fruiting shrubs present- chokecherries, serviceberries, raspberries, blackberries, thimbleberries, chokeberries, native honeysuckle, dogwoods, and more (blueberries bushes were there too, but they berries were gone!)- all grew in thick stands providing not only food but shelter too, in addition to the conifers all around.  Great wildlife habitat, and the only European plants, not as beneficial to wildlife, grew right in the campsite where people walk, no doubt brought as seeds on people’s shoes.

That all these wonderful plants attract birds is only half the story, though.  Wildlife has a large role in landscaping- through animals that pollinate flowers and spread seeds to new areas.  The plants are as dependent on the animals as the animals are on them.   It is a dynamic, ever changing mosaic of relationships almost too complex to imagine.

Sometimes we lose those connections between plants and animals in our own yards, by trying to force nature the wrong way.  Taking out the native plants and replacing them with Asian or European species disrupts the connections that have naturally been developed over many years, and forces nature to try to make new ones.  It’s much better to work with what has worked here for thousands of years.

Fall is a good time for planting, and there are hundreds of attractive native plants that help build those natural connections.  This year, the Restore the Shore Project of which we are a part has planted nearly 2,500 native trees and shrubs in and near Woodland Dunes in the hope of restoring land to a wildlife-friendly condition. Other projects are also taking place, and lists of appropriate native plants for our area are available and we’d be happy to share them.

There’s so much we can do, and so much benefit to be had, from appreciating and working with our native wildlife, especially in our own backyards.