A while back our education coordinator and I were in the forest at Woodland Dunes, and I encountered a large tree that didn’t look familiar.  It was late fall, all the leaves were off, and the trunk was just a bit different from what I had been used to seeing here. Well, it turned out to be a large elm, a tree that in the past was an important part of our forests and which were all around when I was growing up.  There were two very large elms in the yard at my grandparent’s old farmhouse, and their large, umbrella-shaped crowns shaded much of the yard.  Protruding from one of them was the blade of an old scythe, which no doubt had been left hanging in a crotch and around which the tree had grown as if to prevent the implement from harming any other plants. 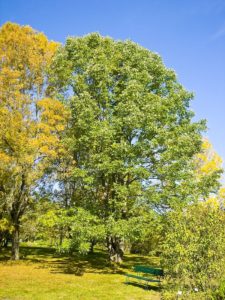 We all know what happened to the elms- unfortunately people brought wood pallets laced with a fungus from Europe that caused Dutch Elm disease in the 1930’s.  Our elms weren’t resistant, so they died by the millions, and continue to do so when they reach a certain size. This happened before, when chestnut trees from the Far East brought a fungus which killed virtually all American chestnut trees here.  In my grandparent’s yard, sure enough, the old elms died.  To replace one, my grandfather went to the woods and hitched his tractor to a green ash tree with a chain, pulled it out of the ground, and dragged it to the yard where it was planted and still grows.  Ash were desirable trees- disease resistant, hard wooded, and straight grained unlike the twisty-grained elm (which helped heat many houses after the trees died despite their resistance to decent splitting).

Grandpa’s choice to replace the old elm with an ash tree made sense at the time, but not so much anymore. In the 1990’s, people once again brought a significant foreign species to North America, the emerald ash borer.  It appears to have been brought to the central Great Lakes region and was first identified in Canton, Michigan in 2002.  Like so many other invasives, when this insect was taken to a place where it was free from its usual predators, its population exploded.  In six short years it had reached Wisconsin and now has reached our county. Last week it was announced that it’s been found in the City of Manitowoc.  On its own the insect spreads relatively slowly, but people have spread infested wood products across the region.  Hundreds of millions of ash trees have died already, and millions more will soon perish. Many thousands of those will be in the preserve at Woodland Dunes. 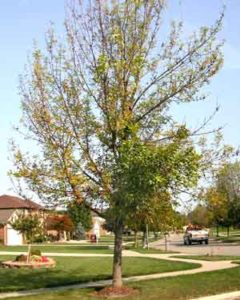 It is difficult to comprehend the changes that such mass die-offs can inflict on ecosystems.  To say that trees are important in our forests is rather foolish, but really the concept deserves a little thought. The trees, or overstory plants, convert sunlight to stored energy (food for themselves and others), intercept falling rain, shade the forest floor, and provide habitat for other species- they are ecosystems in themselves.  Ash trees are hosts for many species of caterpillars of butterflies and moths, and many species of birds visit to find those caterpillars.  All of these will be affected by the introduction of one alien insect brought here on wood pallets.

A few species will benefit- especially woodpeckers and some parasitic wasps.  So far, those animals have had no significant effect in slowing the spread of the emerald ash borer.  We’ll do our best to manage our forest. For several years we’ve been planting other appropriate native species in ash-dominated areas to get a head start on replacing trees we anticipate losing.  We’ll have to greatly increase our efforts in coming years to prevent invasive shrubs and trees from filling the void left by dying ashes.

On a small scale, people can save individual trees by treating them with insecticides.  Treatments can be done once per year, and the cost is modest, considering the value of a nice shade tree.  This would not be practical on a large scale, or in a place like a nature preserve.

Personally, I will consider saving the tree my grandfather planted, and one that I put in the ground some 45 years ago. To see our near future one need only drive an hour or so south.  There are a few dead trees near Sheboygan, and many more as you approach Milwaukee- entire woodlots it appears in some cases.  Although nature is good for us, and healthy, diverse ecosystems can withstand normal threats from pests and disease, one wonders about what these things indicate, that perhaps we are making our forests more fragile and unstable than before.  We have taken a lot from nature, and it has benefited us greatly.  Perhaps now we should give a lot back, or at a minimum, be more thoughtful about what we do.