↓
Home Menu ↓
Skip to primary content
Skip to secondary content
The anticipation of new, positive experiences keeps life fresh.  If I knew in advance exactly what I would encounter on a walk outside in the nature preserve I would quickly lose motivation to do so.  Fortunately, that is never the case- plants and animals continually show themselves in new ways and a walk outdoors is never boring.  If for no other reason, the changing season lends itself to bring about differences not otherwise apparent. 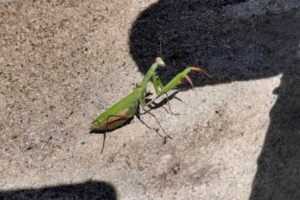 Now, different migrating birds fill the fields, shrubs, and trees.  Birds we don’t often see like rusty blackbirds and a myriad drab green fall warblers.  Each calm night the populations of such birds exchange- some leaving to continue southward, and others arriving from northern areas.  During the day they pick their way through the shrubs feeding on insects and berries, resting when they can.  In a few days they’ve stored enough energy to push farther on their journey.
The later wildflowers are now in bloom- asters, the last goldenrods, brown-eyed Susans, gentians, and ladies-tresses.  Along with them are the last butterflies and bumblebees, their tasks and lives just about finished.  The songs of crickets are beginning to wane as they too lay eggs and succumb to the season, as are the last of the spiders.  But although we know and expect these things, the unexpected still appears.  This week that came in the form of one of the most unusual insects- a praying mantis.
We usually think of mantises as southern insects- I remember finding one as a child on vacation in Mississippi.  Now, they seem to show up more and more in Wisconsin, I suspect as a result of a warming climate.  There are three mantids that are found in Wisconsin- the native Carolina mantis, the praying mantis of Europe, and the Chinese mantis from Asia.  The Carolina mantis is in fact the state insect of South Carolina and we occasionally find them here. They can be either of a green or grayish form.  The praying mantis, which holds its forelegs together as if praying (their species name is Mantis religiosa).  Praying mantis were brought here on nursery stock from Europe.  Finally, there is the Chinese mantis, which was also brought in accidentally.  These mantids will live for a year in warm places and are sometimes kept as pets- you can feed them smaller insects such as crickets.  Outdoors in Wisconsin, they are found in the summer and fall, and lay eggs which survive the winter which the adults can’t tolerate.
Mantids are predatory, and stalk other insects, capturing them with their spiny forelegs.  Some live on the forest floor, and chase their prey, while others wait motionless for prey to come within reach.  Their eyes are placed on opposite sides of their triangular-shaped heads, and they have stereo vision with compound eyes.  Reproduction can indeed be hazardous for the males, which are smaller than females and are sometimes eaten during or after reproductive activities.  The males are either particularly amorous, or slow learners, because those which are not eaten the first time often mate again and eventually may fall victim to their hungry mates.
Praying mantises are sold as a form of natural insect control.  While it is true that they are predators of other insects, I think it is more important to strive for a healthy population of insects, spiders, birds, and other native animals rather than importing insects from other parts of the country or world.  A yard which incorporates native plants and all the creatures that go with them is less likely to have problems with insect pests in the first place.
One of my first encounters with a praying mantis at Woodland Dunes was while leading a hike for a group which included two young children.  The children noticed a bee on a flower, and upon closer inspection we found that the bee was quivering- not because it was shaking itself, but because it had been caught and was being eaten by a praying mantis!  Most in the group had never seen one before, and we lingered in the sunny meadow watching as the mantis enjoyed its meal, not noticing our group.  If it hadn’t been for those observant children, and their vantage point only three feet above ground, we would all have missed a very interesting moment.  There is never a lack of opportunity to learn from nature, and I hope that you will find time this fall to experience many meaningful encounters.