↓
Home Menu ↓
Skip to primary content
Skip to secondary content
September is a month of great transition on the Lakeshore.  All around us, great waves of biological activity have been set into motion.  We are at the peak of migration for many animals, from birds and dragonflies to monarch butterflies.  These movements have taken place since there were glaciers over the land nearby and represent the truly remarkable way these animals adapt to changes in their surroundings.
Although they are full of birds now, adults and their recently fledged nestlings, our forests, grasslands and shrublands can be 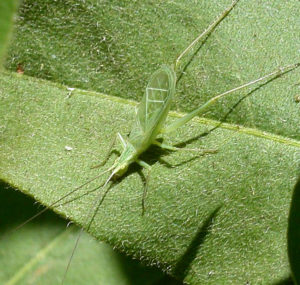 very quiet now, with only soft call notes heard.  The raucous mating songs of early summer are absent as the birds stealthily work their way south.  But if one listens carefully, the songs of birds have been replaced by others- the songs of many singing insects.
Many insect species begin the year as eggs or nymphs or larvae of some sort.  They grow in size and number during the summer, reach maturity, and gain their singing “voices” in early fall.  To me, they are just as interesting to listen to as birds are earlier in the year.  And their songs serve the same purpose.
During warm days, grasshoppers scrape their hind legs together to make raspy or rattling sounds.  The large Carolina grasshoppers appear almost like butterflies as they launch themselves into the air upon approach, rattling as they fly.  In the background, other insects call as well, but I notice them more after dark.
Katydids look like large green grasshoppers, and produce very loud raspy calls of different sorts.  Some almost sound like ducks quacking at night.  Smaller, but just as green-colored are the snowy tree crickets, which emit a pleasant mellow chirp- and being cold-blooded the rate at which they sing increases as the temperature warms.  If you count the number of chirps for 13 seconds and add 40, you get the approximate temperature.  Louder, and harsher chirps are made by the fall field crickets, the black crickets which wander into our houses this time of year and supposedly bring good luck with them.
Mole crickets are unusual creatures which burrow into the soil, and produce an almost constant, monotonous trill.  Their songs are punctuated by those of ground crickets, whose trills are shorter in duration and higher pitched.  These are complimented in the night by the call notes of migrating songbirds flying high overhead.
The songs of singing insects are available on the internet for those who wish to learn them.  Even though a few are pests, insects are critically important components of our ecosystems, as much as any other form of wildlife.  We should be careful not to kill them without good reason, and we should consider ourselves lucky if we are able to enjoy their orchestrations on warm fall evenings.
photo- a snowy tree cricket