Mid January really marks the halfway point in the biological winter season. We’re now into the very coldest time of year, but we’re nearly a month past the solstice and the daylength is increasing. Days are longer because the sun is higher in our sky, and it’s arc is longer. This means more direct radiant heat, and more time for the sun to be up and heating us.  There is a lag time after the solstice, but by late January our daily temperatures start to increase.

Even with the cold, the change in daylength and light starts to trigger changes in the natural world.  Chickadees start to sing their courtship songs “Hey, Sweetie!” long before they actually begin to nest.  Great horned owls are already in the process of courting and nesting.  Some mammals are or will be mating soon, with spring just a couple of months away.

There’s another world beyond our vision- that which occurs in and under the snow.  It’s the nivean (snow) world, and many creatures have adapted beautifully to it.  Tall beings like ourselves live in the supranivean world above the snow, along with birds, deer, and others who are chioneuphores or winter tolerators..  Most people I know are not lovers of winter, so I think we’re a good fit for the tolerator category.  Other creatures are chionophiles- they thrive in winter, and many of them do so with the aid of the snow.  They live in the intranivean (within the snow) or subnivean (beneath the snow) environment.  If the snow is not too dense, it is easy to tunnel through, allows light to penetrate, and provides good insulation. Ruffed grouse, rabbits and hares, and other medium-sized animals can take advantage of the intranivean world, burrowing into the snow on cold nights to lessen the harshest conditions.  In the submivean zone, at the interface between snow and the ground, there can be enough warmth and light for plants, fungi, bacteria, insects, and even small animals to not only survive but thrive.  Voles and mice, shrews, spiders- all can do very well beneath the snow.  Meadow voles build tunnels and igloo-shaped grass nests which become apparent to us when the snow melts in spring.  Sometimes this evidence of their mid-winter 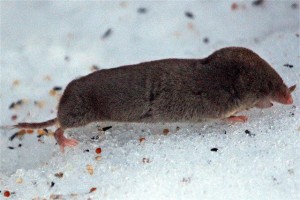 munching on our lawns appears alarming, but when the grass starts to grow again evidence of them disappears.  If the snow is the right depth and density, the voles can even raise litters of pups in winter under the protection of their snowflake blanket.

If the snow thaws and then refreezes, its density increases dramatically, and conditions for the subnivean dwellers may not be so favorable.  Dense snow transmits less light so plants don’t maintain high levels of chlorophyll, doesn’t insulate nearly as well, and requires more effort to dig through.  The recent rain followed by very cold temperatures has probably made life difficult for a lot of animals.  But for those which survived, more dry snow is now covering the ground again, and their world is probably looking better to them.

Some animals have adapted to living in or on all the snow-worlds.  Weasels for example, can navigate effectively above, within, and beneath the snow layers, relentlessly pursuing a meal.  Larger members of their family, like fishers and otters, are also active in winter chasing larger prey both above and beneath snow and ice.

Our ability to perceive these unseen worlds is limited only by our understanding and awareness of them.  Like so many things, the barren surface of the snow conceals a marvelous web of living things waiting to be discovered.