Is anyone else ready for spring?  I think most of us appreciate having four distinct seasons, none of them lasting too long.  This winter seems to be dragging just a bit, and I’m sure wildlife are having to employ all of their survival strategies to make it through.  There are some animals for whom this winter has been very hard to endure.

The diving ducks along the Lake are an example, and they are probably restricted in their feeding by the extent of the ice this year.  Its been a long time since there was this much ice cover.  Bald eagles seem to be taking advantage of ducks in a weakened condition, and other ducks have crawled up on the ice to die.  The fortunate ones are recovered and brought to wildlife rehabilitators like Sue and Jerry Theys of Wildlife of Wisconsin, who have the expertise to care for these unfortunate animals until they can be released.

Although we think of predators as having the upper hand in life, they too are challenged to find enough food to enable them to keep warm.  A few weeks ago a red-shouldered hawk, an uncommon raptor in our area, was found on the ground frozen, and appeared to be in an undernourished state.

It is at this time of year that birdfeeding makes sense.  The practice of putting out seed has its downsides- mainly unnaturally attracting large numbers of birds to one location, making them more susceptible to disease transmission and predators.  However, if done properly, it does help sustain them when they need the food the most, and also makes them accessible so we can more easily appreciate them.  One can always stop feeding when the weather warms and allow the birds to disperse across the landscape.

The populations of birds at the feeders at Woodland Dunes include a lot of “usual” species, including house finches, goldfinches, cardinals, downy and hairy woodpeckers, lots of chickadees, and a substantial number of American tree sparrows.  Tree sparrows are very hardy little birds which nest in the far north and come here to spend the winter.  They like brush habitat with scattered trees, and the area around our headquarters seems very attractive to them. 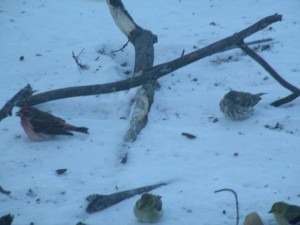 In contrast, the feeders at my home have a lot of the same species but in very different proportions- only one tree sparrow, a bunch of cardinals, chickadees, nuthatches and woodpeckers, but well over a hundred finches, mostly goldfinches but with a small group of purple finches, another northern species of the spruce-pine forests.  And one really hardy robin, which has been around all winter pecking at dried apples in the orchard.

Although it doesn’t seem like spring outside, it’s beginning to sound like spring.  The goldfinches are chattering constantly, and the tree sparrows are starting to sing abbreviated spring songs.  House finches and cardinals have already been singing for several weeks now, and do so on the coldest days this time of year.  And chickadees- those amorous, feisty little birds started their courtship songs back in December even though it wasn’t close to nesting season, and have continued with increasing frequency.  They can tell the sunlight is stronger and the days longer.  Their physiology is changing from survival to reproductive mode, and in a while there will be another generation added to the mix.

So, if the long winter discourages you, there are two things you can do.  First, find a copy of Aldo Leopold’s A Sand County Almanac, and read the passages for March and April.  Second, find a sheltered, sunny spot near a bird feeder and listen to the sounds of anticipation.  Those birds have made it through a rough winter, but they still have the motivation to sing.  Its hard to stay somber amid their songs.

And maybe put out an extra handful of seed to say “thanks”.