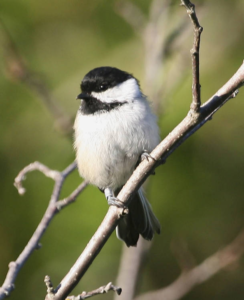 While out walking through the woods, a familiar song was heard in the surrounding trees… “Cheeseburger!” Guess what that means…spring is near! What does a cheeseburger have to do with spring you may ask? Well, my favorite little bird, the chickadee, calls out its “Cheeseburger!” or “Hey Sweetie!” song more frequently in the springtime. Males begin singing that song in mid-January, becoming more frequent as the winter progresses, and is then heard much more often in spring. Since we are on the topic of those neat little birds, you may know their famous “chickadee-dee-dee” call, but did you know that they use that call to tell an entire story to one another?

Chickadees are one of the best alarms of the bird world. They warn each other and other birds when danger is near. How do they do that? Well, recent studies done on chickadee calls have discovered that they can not only share information within their alarm call about a nearby threat,  but also the size, relative threat level, and location of that danger. How neat is that? All by slightly adjusting their “chickadee-dee-dee” call.

A study done by the University of Washington reported that after listening to over 5,000 alarm calls, there is indeed a pattern to what the chickadees are saying! The number of “dees” at the end of their call corresponds to the size and threat level of the danger nearby. The more “dees” at the end of the call, the more dangerous the threat is. Now we humans may think that a large predator like a hawk would be the most dangerous threat in the chickadee’s eyes, but that isn’t the case. Chickadees actually see smaller-sized threats as being more dangerous, given that smaller predators are more agile and more likely to catch the chickadees. This means that the number of “dees” added on to their song is much higher for smaller predators than it is for larger ones. For example, a large cat on the ground may only elicit five to ten “dees” whereas a smaller hawk perched nearby may elicit two dozen “dees.” So, just by changing the number of “dees” in their call, they can tell others about the size of danger (and that there is danger nearby).

But what if they want to say where that danger is? Well, they can. Chickadees will use their “chickadee-dee-dee” call for predators that are on the ground, stationary, or perched. If the danger is flying above them, they will use a different call, their “seet!” call, to tell other birds that there is an aerial threat.

Now, just because you hear the “chickadee-dee-dee” call does not mean there is always danger around. They also use that call for other social conversations, such as announcing where food is, which is why you may hear that call around bird feeders. But, the general rule is that if you hear 5 or more “dees” then it is more likely to be a warning call instead of just a social call.

Another call they make is called their gargle call. This call is said to sound like “a garbled mixture of calls all mashed together” and even though to us it may not sound like a song, it acts like their other songs in that it is linked with courtship and establishing territories. This call is also heard when lower-ranking chickadees are too close to higher-ranking chickadees.

For being such a small bird, they sure do have a lot to say! How they are able to communicate so well with one another about the specifics of danger is already really neat, but it gets even cooler when you think of how they are making those calls to tell other chickadees about what they will be up against. Chickadees will often mob together and fly at the threat in an attempt at driving it away. Those little birds seem to have no fear.

Next time you hear a chickadee, try to listen and figure out what they may be communicating with the birds nearby. That might help you spot and understand what they are seeing.

Photo from US Fish and Wildlife Service digital library