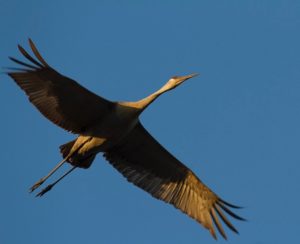 It’s a prehistoric look accompanied by a prehistoric trumpeting sound. This interesting beast is our current pterodactyl of the sky, the Sandhill Crane.

Sandhill Cranes are making their way home and their arrival numbers are ever increasing. On Saturday, April 9th, bird enthusiasts from six states in the Midwest will be awake in the dark, coffee in hand, and counting sandhill cranes as the sun rises.

What began in just one Wisconsin county in 1976, has grown into a Midwest program with over 1,600 volunteers in six states signed up to count how many species they see and hear, including those in courtship.

Why are people counting these mammoths of the sky? Because in the 1800s they were hunted to near extinction. In 1916, the federal Migratory Bird Bird Treaty Act was signed, protecting the rest of them in our Midwest region. The count now includes the endangered Whooping Crane, all to get an idea of population trends and habitat management.

In 2001, the Midwest Birding Symposium took place near here, in Green Bay, Wisconsin. Conservationists and bird enthusiasts from the Midwest gathered to learn more about what can be done to protect and enjoy our birds. During the symposium, there was a focus on raising funds for Whooping Crane reintroduction in the eastern part of the United States. The National Fish & Wildlife Foundation awarded challenge grants to the U.S. Fish and Wildlife Service to help fund the reintroduction.

“Every $1 you contribute will be matched by the Foundation, bringing us ever closer to the day when Whooping Cranes will again grace our landscape. The National Fish and Wildlife Foundation is also supporting the crane reintroduction through the Pathways to Nature Conservation Fund, an exciting partnership with Wild Birds Unlimited.”  Though this program, $25,000 went into reintroduction efforts at the Necedah National Wildlife Refuge in Wisconsin.

As our state continues the debate on Sandhill Crane hunting, so do current headlines that go something like this, “4 endangered whooping cranes killed in Oklahoma during hunting season being considered in Wisconsin,” Jan. 3, 2022. Following these headlines are these poignant facts: The cranes are endangered, with a few more than 800 in the world, both wild and captive. About 80 are nesting in Wisconsin.

I’m not sure how much money was raised at the symposium 21 years ago, but there will never be enough to bring back these endangered and majestic birds. Caring for our feathered brethren will always be.  Continue we must, to face into the wind so we can learn and they can fly.