It has not been an uncommon sight for me to wake up and see some very interesting birds perched on the top of the barns near my house. Time and time again, turkey vultures have been basking in the sun with their wings outspread. Although they are not the most attractive bird, they have an interesting and unusual life. 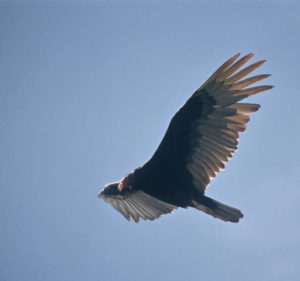 Turkey vultures get their name from their resemblance to the wild turkey. They have very little or no feathers on their head, leaving their red skin exposed. This, combined with their dark plumage, is reminiscent of a male wild turkey. Standing 24 to 32 inches tall with a wingspan of 63 to 72 inches and weighing in at 1.8 to 5.2 pounds, they are much larger than turkeys. Unlike most birds, it is difficult to tell the difference between genders because both have the same plumage, coloration, and similar size.

Turkey vultures feed on carrion (dead animals) and prefer to eat those most recently deceased. Vulture means “tearer” referring to the way it tears flesh from a carcass. Their large olfactory lobe allows them to pick up the scent of ethyl mercaptan, a gas that is produced early in the decaying process. Their feet are flat and relatively weak, making them poorly adapted to grasping prey. Turkey vultures are often seen on the side of the road feeding on roadkill or near a body of water feeding on washed up fish. Rarely, they will feed on plant matter and they almost never kill their own food.

Though they are large, turkey vultures can fall prey to other large birds such as great horned owls, red-tailed hawks, and bald eagles. As a defense mechanism, they will regurgitate semi-digested meat. They can feed on carrion and are not bothered by the smell of decaying meat. However, when other birds smell it, they are deterred from the turkey vulture’s nest due to the foul smell.

These birds do not have the best reputation mainly because humans believe that turkey vultures can carry viruses such as anthrax or hog cholera. However, turkey vultures have very strong stomach acid that destroys these types of viruses when their food is digested.

Turkey vultures are scavengers with unattractive habits, but they play an important role in our ecosystem by helping to control the spread of diseases.