Our natural world is comprised of both living and non-living components, and the last third of our summer this year was enhanced by the non-living.  Amongst the most spectacular natural phenomenons – the Perseid meteor shower and the solar eclipse.

We, at Woodland Dunes, are fortunate enough to have  our own little observatory, the Alyea Sky Shed.  It’s equipped with a magnificent telescope and manned by volunteers Al and Ben, both great amateur astronomers.  The dynamic night-sky duo offer frequent evening programs, but because they’re weather-dependent, they sometimes happen with a day’s notice. (Check our Facebook page to find last-minute posts announcing these “star parties.”)  People are welcome to bring their own scopes and get advice on how to use them. 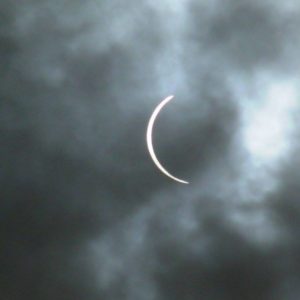 I was fortunate to check off a “bucket list” item when the solar eclipse occurred.  I have family in Tennessee, which we always visit in the summer.  The path of totality for the eclipse ran just a couple hours from where we stay, so on the advise of my brother-in-law, we found ourselves in the lovely little town of Franklin, NC, nestled in the Great Smoky Mountains on the morning of Aug. 21.  There were about 10,000 people gathered in a town with a population of 1,500 normally, and the atmosphere was festive!

They were well prepared. The civic center had astronomers on hand and NASA’s live broadcast was airing inside.  They handed out 2,000 pairs of eclipse glasses to visitors, and there were vendors and children’s activities on the streets.  Every business was open and packed with people, especially the handful of restaurants. Even the little Scottish-American heritage shop (there are apparently more people of Scottish ancestry in North Carolina than there are in Scotland) was participating in the celebration. 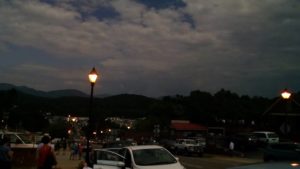 Town of Franklin during eclipse

At about 1pm the moon began to pass in front of the sun, and gradually people began to find their special places to watch the event.  The sunlight began to fade, and people became quieter as it did.  Somebody had a drone, which flew above.  People watched the sliver of sun shrink, and noted with concern a large cloud approaching from the south.  Sure enough, just as the last bit of crescent sun could be seen, the cloud advanced – but it didn’t entirely obscure the sun/moon couplet.  At this point, most were trying to photograph the eclipse, and found that the transparent clouds actually made the scene more interesting.

Then, at 2:35, the last crescent of sun disappeared and the town was enveloped in an eerie, gloomy, semi-darkness.  Magically, the sun’s corona appeared above us, looking like something out of the “Lord of the Rings.”  A firework was set off, signaling that it was safe to view the event without protection and the crowd cheered.  All around was twilight. Streetlights came on and above was what looked like an eye staring down at us.  The moment was surreal and one had to fight the urge to spend too much time trying to record it so they could be present.  Our family couldn’t resist snapping a “selfie” of all of us with the corona above our heads, however. 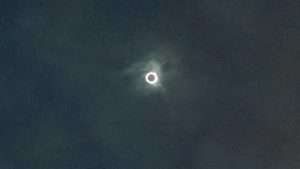 After a few more seconds, we witnessed the “diamond ring” (where the tiniest bit of sun shines among the moon’s mountains), and then the return of the sun crescent on the other side of the moon. Fireworks charged again to signal “glasses on,” and folks cheered at the return of the sun.  Instantly, the corona disappeared and the sun crescent grew again.  People immediately began to leave as the daylight grew brighter.

It was wonderful to see so many people interested in a natural event and to know that so many across the country did as well.  I don’t know if anybody has talked about it, but I’m sure the economic impact was enormous compared to even the largest sporting or other events.

People came to see the eclipse because there was a lot of awareness around it.  There are amazing natural events all the time and I think we should talk about them more, highlighting the wonders of our area – both natural and historic.  I certainly wish for the sake of our local businesses that there could be a total eclipse here (but this is determined by physics, not people…). It must have been the most profitable day ever in Franklin, and the event introduced me to a small town I would love to visit again.

The next solar eclipse is only seven years off and totality occurs much closer to us.  If you can, I would recommend you experience it, and I hope your experience is as wonderful as this was for me.