The life around us flows like tides in the ocean.  In spring, the tide of migrant birds and insects flows north, finding places which support their families.  After a successful summer, even more animals flow south again to places where food is available in the winter.  In spring, these movements are obvious as the birds are dressed in their finest colors, but now they quietly flit among the leaves filling their bellies with insects, spiders, and fruit between long flights southward.

Places covered in good habitat, meaning lots of native plants, are also covered in birds right now.  A recent 10-minute, stream-side stop on a quiet evening revealed that the trees and shrubs were anything but quiet, instead populated by many warblers like the Tennessee, and yellow-rumped, American redstart, and northern waterthrush, along with Swainson’s thrush, wrens, catbirds, grosbeaks, song sparrows, cardinals, and robins.  Down by the water, a spotted sandpiper looked for different bugs, and a hummingbird, instead of it’s usual search among the jewelweed and other flowers for nectar, was delicately plucking insects from a dead tree branch.  None were singing, save the squeak-toy sounds of a nuthatch, and if one didn’t listen for the soft call notes, one wouldn’t know the birds were there.  The foraging of the birds coincided with the emergence of many winged queen and drone ants that evening- an unfortunate ending to the ant’s wedding night, I suppose. 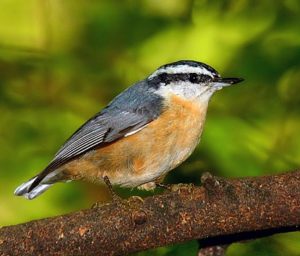 These fall flights are all made possible by the presence of native plants.  The insects here, the overwhelming majority of which are beneficial or at least not noxious, have no interest in foreign plants.   Their lives depend on the natives, and the lives of birds depend on them.  We have removed a lot of native plants from our world and substituted non-natives, and it is estimated that there are now far fewer birds as a result.  Fortunately, northern Wisconsin has a lot of native forest, and there are enough scattered patches around here that we can still experience these wonderful migrations, even if they are diminished.  Fortunately, we are coming to realize that even landscape plantings of natives around our homes can provide some habitat for wildlife.

Wetlands, too, are especially good for wildlife.  The combination of water and native plants can produce many insects and other food for wildlife.  More than half of the wetlands which once existed are gone now, the land having been put to other uses.  Of course from time to time we are reminded that wetlands also serve to store floodwater and even after we alter and drain them, water still seeks those areas out. Each fall we find out what happens when homes are placed in areas that used to be wetlands and now subject to tropical storms.  Like many of us, I will gladly deal with winter rather than be flattened and flooded by such weather, and I feel badly for those who are.

All the native plants, and wetlands, which are preserved or planted contribute to the welfare of wildlife in the fall, when migrants need help the most.  Many of them are in their first year, and on their first major journey, and it is the most dangerous time of their lives. Know that the things you’ve planted in this and previous years, may make the difference between survival and death for them. Know too, that with your help they will again return next spring in a brighter and louder form to once again improve your yard and make for you a better day.

photo: a red-breasted nuthatch from Wikipedia