Most people that I know enjoy being outdoors, and feel that it is good for them to do so.  Like other aspects of nature, it is interesting to study the interaction of people and the world around them and examine how we feel about the outdoors, and each other.  For those of us who work as environmental teachers, it motivates us to find new ways to get people outside. 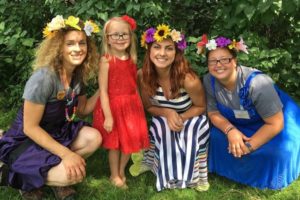 In January of this year, a national study was conducted to better understand women’s relationship and attitude towards the outdoors. The results showed three-fourths of women felt they are under more pressure to conform to socials norms than men. However, they view spending time outdoors as a way to escape these pressures and the majority of women want to spend more time outside. The women surveyed also felt liberated when they were in nature and eighty-five percent also felt being outdoors positively impacted their overall well-being.

Six in ten women surveyed felt that men’s interests in outdoor activities are taken more seriously that women’s. Role models are hard to come by, as sixty-three percent of women were unable to name a female outdoor role model. At first, I found this surprising, but once I took a look around me, I have to agree. The media is full of images of men rock climbing, canoeing and camping.

The study also concluded something we’ve known for years: appreciation for the outdoors starts young. Young children who spend ample time in nature are more likely to be active and care about the outdoors when they are adults. Girls that spend time outside are also more likely to place value on adventure. Beyond ample time in nature, young girls (and all children) need a mentor to guide them and share in their outdoor experiences. In the study specific to women, the majority named their mother as their top female role model and those encouraged to spend time outside as young girls were twice as likely to report their mother was the one encouraging them.

Nature should be a level playing field that everyone can explore and enjoy. Woodland Dunes and the Ice Age Trail Alliance have partnered to bring the community a fun program to encourage women and girls to spend time outside. This program is called “Be a Nature Princess….at Any Age!” and will take place the morning of Saturday, November 4th. Grandmothers, aunts, mothers and friends are encouraged to bring the young girls in their lives for a royally good time! The majority of the program will take place outdoors on a portion of the Ice Age Trail. We’ll be breaking stereotypes and getting dirty while we explore the natural kingdom. Go girl power! For more information about this program, contact Woodland Dunes Nature Center.

This program is part of a series of programs organized by the Ice Age Trail Alliance called “Force of Nature: Trailtessa Retreats.” The series offers a variety of programs encouraging women to experience adventure, freedom and nature on the Ice Age Trail. Topics include outdoor yoga and mindfulness, art, trail running and even invasive species removal.

Spending time in nature with all children is important, however there needs to be more effort to engage girls and women in the outdoors. I urge you to be a role model and spend time outside with your daughters and granddaughters. Invite her to hike, bike, jump in puddles or catch bugs. Show her how to dig into the soil, climb a tree or kayak. The Lakeshore is a playground for all ages.